The challenges of continuous bioproduction 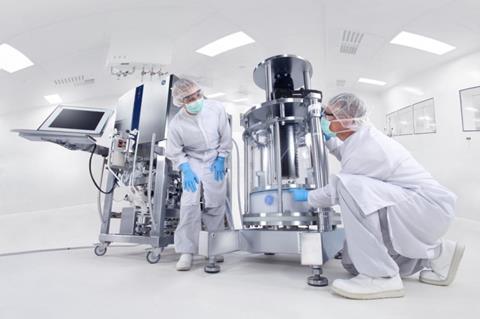 Bioprocessing technology is traditionally a batch-process technology. Cells are grown in a closed bioreactor for a few weeks and then harvested. Manufacturers have been working on making this a continuous process, particularly with regard to column chromatography for purification. Experts from four companies in the field will give a glimpse into what has been achieved and what the future challenges are.

The experts agree: continuous production is currently most suitable for the production of mAb’s (monoclonal antibodies). The developments in bioproduction of mAb’s for immunotherapy, are ahead of others such as for gene therapy, according to Marc Bisschops, Director Biopharm SLS Continuous Bioprocessing at PALL. “Different mAb’s all behave very similarly in the process. Therefore it is easy to develop new production techniques.”

“In addition, the production costs of mAb’s are under pressure, among other things due to the introduction of so-called ‘biosimilars’ (an imitation of an expired patent biological drug),” says Michael Felo, Director Downstream Process Integration at Merck in Bedford (USA). “Traditionally conservative manufacturers are now more inclined to try out new technologies.”

“The goal is not continuous production per se, but intensifying the purification process and increasing the production volume,” according to Gerben Zijlstra, Global Technology Consultant Continuous Biomanufacturing at Sartorius. With the advent of immunotherapy and biosimilars, the number and the production volume of mAb and variants is increasing considerably. But it is not always easy to predict the market share for any product. Flexible production using single-use bioreactors is therefore in demand. These bioreactors are increasingly efficient due to the use of perfusion techniques, and are increasing in size as well. “The goal of all these efforts to improve bioprocesses is the flexible production of an affordable product that can be brought to the market quickly,” explains Zijlstra.

Purification is one of the important parts of bioproduction that needs to be turned into a continuous process. The main technology is column chromatography. Continuous chromatography has many advantages according to Bisschops. “The expression level of mAb’s has increased tenfold. The limiting factor is no longer the bioreactor but the purification and in particular the first chromatography step. A large production facility with 5000 L bioreactors needs columns with a diameter of two meters. These contain a few million euros of adsorbents. That accounts for a large part of the mAb production costs. Also, such a column takes up a significant amount of space. Using continuous chromatography, the manufacturer can apply multiple small columns instead of one large one. This process change can account for a space and cost savings of up to 85%.” 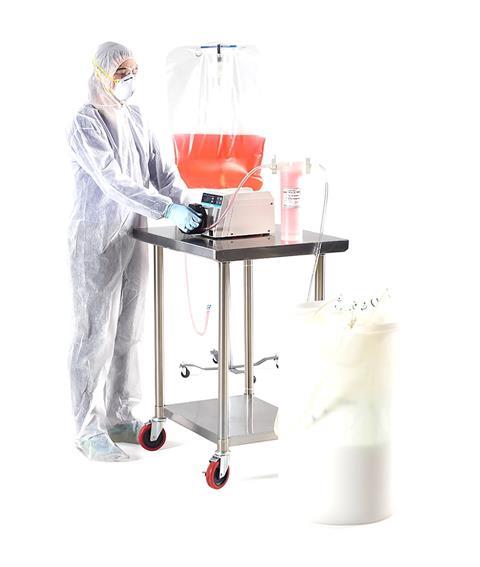 Mike Felo from Merck also sees the cost advantage. “Our customers want flexibility in both production and location, they are looking for better product quality and cost reductions. Continuous production is an important part of the solution for all of those needs.” Another advantage of continuous chromatography is that the residence time of the cells in the bioreactor is shortened considerably, says Mochao Zhao, Product Manager Single-Use Membrane Chromatography at Merck in Burlington (Canada). “An increasing number of highly sensitive biomolecules are being produced that are unstable in the bioreactor. These molecules will benefit from an accelerated process.”

However, turning chromatography into a continuous process is not obvious, says Kees Slijkhuis, Sales Development Manager Hardware Bioprocess at GE Healthcare. “Chromatography is never a continuous process. It consists of several steps: preparation, equilibration, washing, elution and cleaning of the column.” A convenient solution for this problem is multicolumn chromatography. After flowing through the first column, the reaction mixture overflows to the second column. When the first column has reached its maximum capacity it is removed from the flow and replaced by a new one. If the first column was overloaded, the second column can be used to collect the additional product.

A number of manufacturers have developed their own version of the multicolumn system. GE Healthcare developed the ÄKTA™ chromatography platform based on the multicolumn system Periodic Counter Current chromatography (pcc). The main feature of this system is the ‘dynamic control’ function based on UV-sensors, explains Slijkhuis. “It is vital to know exactly when is the best time to switch from one column to the next to ensure the highest yield in the shortest amount of time. Using UV-light, we measure the composition of the mixture before and after the column. Based on these data, the software determines which is the best time to switch over. This does not depend on the condition of the column or the speed of loading. The advantage is that we can use a column for a longer period of time. It also prevents the loss of product due to a bad column. Automation is essential here. The decision to switch can not be made by hand.”

PALL presents the only single-use system for continuous chromatography, the Cadence® BioSMB which uses simulated moving bed technology. “The advantage of single-use is the elimination of a cleaning step,” explains Bisschops. “A continuous chromatography system has many tubes, pipes and valves. It is a major challenge for cleaning. Additionally, we have made a strong effort to simplify the operation of the Cadence platform. Cleanroom operators are having a hard enough job as it is, so installation and operation should be super easy.”

The columns that are used to separate the products from the cell culture are traditionally packed with resin beads to which ligands are bound. These ligands are selected to bind the product tightly during loading, but rinsing with a buffer solution will fully release the products afterwards. For mAb capture, the ligand is usually Protein A. Resin beads are the preferred carriers because of the large amount of product they can hold, explains Zijlstra from Sartorius. “The binding capacity of resins is very high. But the residence time on the column for the reaction mixture is long because the products reach the ligands by diffusion only. That takes minutes.”

There are many developments to improve the properties of resins, says Slijkhuis. His company GE Healthcare marketed MabSelect™ PrismA, a resin that only requires a very short time for the antibodies to bind, the so-called dynamic binding capacity. “Additionally, this resin is stable when rinsing with a strongly alkaline solution up to 1 M NaOH. That prevents the growth of unwanted micro-organisms and the accumulation of contaminants in the chromatography columns.”

The challenges of column chromatography can also be addressed using membranes. Merck produces chromatography membrane adsorbers that can be used for capture, intermediate and polishing purification in the process. “We develop innovative single-use membrane chromatography products with the Natrix® membranes,” says Zhao. “These are three-dimensional hydrogel membranes with an open structure that allows a high flow rate to be achieved yet still maintain good binding capacity comparable to a resin column thanks to a high functional binding group density. This proprietary membrane technology is versatile in that the polymer chemistry can be easily tailored to accommodate different functional groups, for example the widely adopted IEX functional groups, or ligands such as Protein A, to enable a fully single-use chromatography train for a continuous process to boost productivity and flexibility.” 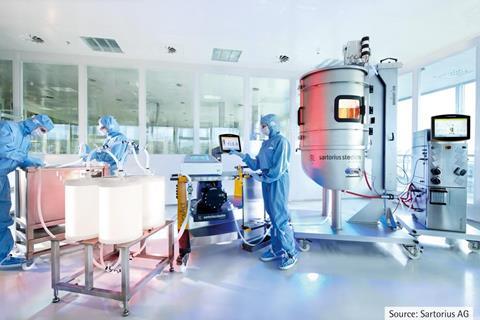 Sartorius also supplies membranes with protein A as a ligand, instead of resins, says Zijlstra. “Binding only takes seconds, much faster than with resins. Originally, the binding capacity of membranes is a lot lower than of resins. That meant you needed more buffer for elution and you were mainly diluting the product. But there are new membranes available with a higher capacity. Combined with the fast binding you could even apply this technology in batch mode as a filter. In that case, there is no need for continuous chromatography.”

These techniques are already widely used for small production facilities of mAb’s, but not yet in commercial production. That is still a few years away. Kees Slijkhuis of GE Healthcare explains: “An important point is the regulation of medicine production. The food and drug authority FDA is definitely stimulating these developments in the US. But when a manufacturer makes any changes in a process, he does need to prove again the quality of the product.”

Zhao from Merck also sees that regulation can provide more guidance. “For example in batch definition, which is strongly linked to quality management and traceability especially in the times of a recall action for a medicine and investigations. We could use some guidance from the authorities here.” Bisschops adds: “For this reason, in the US, we work closely with other large companies such as Bayer, Amgen and MSD, so that we can communicate to the regulating agencies with one voice. For the time being, I see no reason for concern.”

Automation needs attention as well. GE Healthcare’s Slijkhuis says: “An increasingly continuous process increasingly needs sensors for process control, for example to monitor the amount of antibodies, the amount of surfactant needed and controlling maintenance. We will need to adapt to those needs as well.” Bisschops adds: “Automation generates more data. That is an advantage for example in quality control, but operators will need to learn how to deal with those data. The right way of sampling is also important. In a dynamic, continuous process, there are more fluctuations. Therefore you need to think carefully about respresentative sampling. Finally, contamination is an issue. An continuous system is always running, so contamination can creep in and will stay in. Using single-use systems, this can be partly solved.”

Looking toward the future

Zhao says: “I hope that in two to five years we will have a complete single-use chromatography platform for mAb purification and perhaps for other molecules. Her colleague Mike Felo agrees: “Even if there will never be a fully continuous process on a commercial scale, we have learned a lot from the efforts. With this knowledge, we are able to intensify parts of the process.” Sartorius is putting their resources into membrane technology, according to Zijlstra. “We see a lot of value in that. Whether it will be commercialized in the next few years, we will have to wait and see.”

GE Healthcare Life Sciences has broad expertise in areas such as drug discovery and biopharmaceutical manufacturing technologies. It helps cell-based companies to make their production as efficient as possible. For example, the company is involved in many projects related to the development of vaccines and gene therapy. These include the ÄKTA™ chromatography platform for the smaller bioprocess plants, and the BioProcess platform suitable for large volumes.

Originally from Germany, Sartorius is a major player in the bioprocess industry worldwide and invests a considerable amount of R&D money in this growing market. For example, the company has developed the ambr mini bioreactor systems in addition to the Biostat STR, a single-use system for e.g. the large-scale production of medicines from cells. In addition, Sartorius develops the Umetrics Suite software for the automation of bioprocesses.

Merck is a leading science and technology company in healthcare, life science and performance materials. The life science portfolio supports customers during all stages of the drug manufacturing process. With products, applications and services including single-use manufacturing, filtration, chromatography and purification, virus reduction, pharma and biopharma raw materials, drug delivery compounds, and engineering and validation services, we are committed to best support our customers’ goals of intensified, connected or continuous bioprocessing. The life science business of Merck operates as MilliporeSigma in the US and Canada.

PALL Life Sciences has its headquarters in Port Washington, New York and is originally a supplier of filters. In recent years, the company has continued to develop into other products, such as chromatography, single-use systems, bioreactors and mixers. With this broad portfolio, PALL helps its customers to produce new medicines, vaccines and pharmaceuticals. It is also involved in the optimisation of current processes, for instance by integrating chromatography and analysis methods into the system.