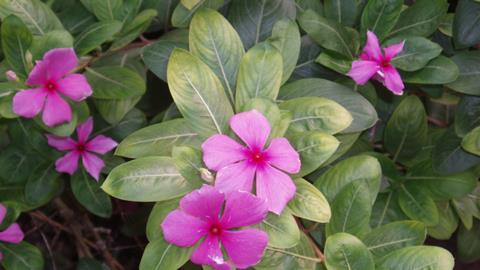 After 56 genetic operations, yeast cells can produce the cancer drug vinblastine. This way you can prevent shortages of this natural alkaloid, write Jay Keasling (UC Berkeley) and a group of Danish colleagues in Nature.

As far as they can tell, this is the most complex biosynthesis pathway ever transferred to a micro-organism. In total, it comprises 31 steps. According to Keasling, it proves that you can have just about any natural substance made by yeast cells, which have the great advantage of being able to work effortlessly on an industrial scale.

Vinblastine inhibits cell division. The substance has been used for half a century against various cancers, including Hodgkin’s disease. It is unpleasant stuff, but there is still nothing better. It is extracted from leaves of the pink periwinkle, Catharanthus roseus, (see large photo) an ornamental plant native to Madagascar. But for one gram of chemotherapy you need at least 500 kilograms of leaves, and recently there has already been a prolonged shortage. In the lab, you can now chemically synthesise vinblastine, but the many stereocentres make synthesis a laborious procedure that is difficult to scale up.

A few years ago it was clarified which enzymes C. roseus itself uses for it, and Keasling has now put this knowledge to use. In yeast cells, he assembled the genetic codes of 34 of those enzymes, with 22 other modifications to ensure that everything would be expressed correctly. 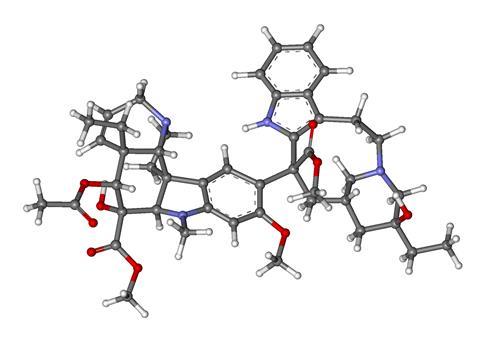 It worked to the extent that the yeast cells now correctly produce the semi-finished products vindolin and catharanthine. Only the very last enzyme, which should assemble the two into vinblastine, is not yet working properly. However, this is not a problem; to increase the yield of the leaves, vindoline and catharanthine are already being extracted from them and put together afterwards in vitro.

Incidentally, the research was carried out at DTU Biosustain, in full the Novo Nordisk Foundation Center for Biosustainability in Lyngby, Denmark. Keasling, who is mostly associated with Berkeley in California, is scientific director there.