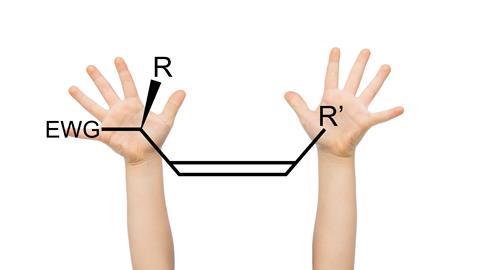 Groningen researchers have found an easier way to make alkenes where the functional groups are on the same side, according to a paper in Science Advances.

Alkene compounds (C=C) are found in biologically active substances and are at the basis of many chemical reactions. When making functional alkenes, you can theoretically make them in two flavours: either the functional groups on both sides of the alkene are on the same side (\C=C/), or on the opposite side (/C=C/). The first variant is called a Z-alkene – from the German zusammen (together) – and the second an E-alkene, from the German entgegen (opposite). E-alkenes are thermodynamically more stable and easier to make, but sometimes you’d prefer the Z variant. Syuzanna Harutyunyan’s group from the University of Groningen has found a way to selectively synthesise this Z variant.

Harutyunyan explained in an email: ’Although making Z-alkenes is difficult, there are different possibilities known. What is special in our work is that we dont simply make a Z-alkene, but we make one that has a double bond next to a chiral center which is bound to an electron withdrawing functional group. Synthesis of such structurally and stereochemically challenging Z-alkenes was not possible with previously reported synthetic methods.’

One of the best-known ways to make an alkene is via the Wittig reaction, in which you attach a triphenylphosphine to a carbon group. You then let that react with an aldehyde to form the alkene, the majority of which is then usually the E-form. In many cases, though, you can control reactivity. Luo Ge, Esther Sinnema and colleagues modified the triphenylphosphine: instead of three phenyl groups, they replaced one with (a variant of) pyridine, so that the resulting phosphine salt would become more electron-withdrawing. This then makes the H atom next to the phosphine group more acidic and thus more reactive. If you subsequently add a base, it will more selectively attack that more acidic H atom rather than the allylic H atom next to it (causing unwanted side reactions).

The strategy worked: they did dozens of reactions in which they provided different substrates, aldehydes and even a few large complex molecules with alkene groups. Yields were around 70-80%, with enantiomeric purity (excess of either right- or left-handed Z-alkene variants) over 90% in many cases. It is thus a new useful tool in the organic chemist’s toolbox. In the RUG press release, Harutyunyan says: ‘We expect our new publication to pave the way for using commercially available simple alkenes to make complex, functional alkenes via the intermediate steps of a phosphine and a salt.’ 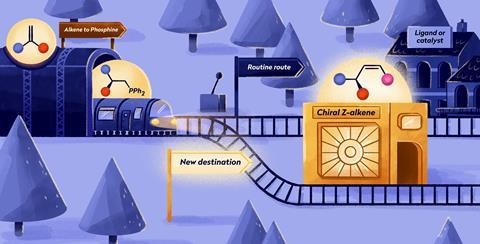