The Sisters in Science, Noor Abdulhussain, Lotte Schreuders and Mimi den Uijl, have been awarded the KNCV Van Marumpenning 2022 for their contribution to the visibility of chemistry and its practitioners among a wide audience. The award will be presented on 13 October during the Evening of Chemistry, which will take place in Leiden this year. 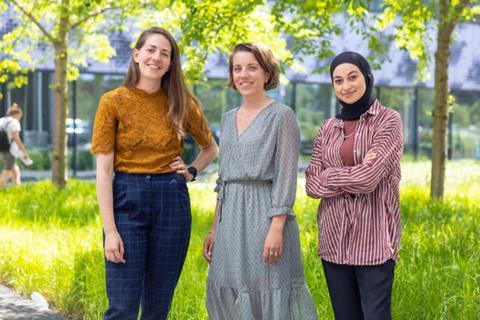 Abdulhussain and Den Uijl are PhD students at the Van ’t Hoff Institute for Molecular Sciences at the University of Amsterdam, Schreuders is a lecturer in the Chemistry master’s programme, track Analytical Sciences at the same university.

In January 2021, the three sisters started an Instagram account, SistersinScience_NL, in which they introduce their followers to their daily life and work. They explicitly use their own lives and experiences to show something about their research and work, but also about what it means to be a young, female scientist in chemistry. According to the jury, the latter in particular is ‘an innovative aspect, taking them beyond the usual forms of science communication that mainly focus on explaining complex research and the importance of science for society. The Sisters in Science make it personal and don’t shy away from the less pretty sides of a scientific career either.’

Besides the Instagram account, the Sisters in Science have participated in a wide range of activities introducing children, young people and also the general public to science, ranging from large-scale science festivals to performances in theatre shows, workshops and training sessions.

Through their accessible appearance, use of modern communication tools and their recognisability to a culturally diverse audience, they act as refreshing role models for young people, according to the jury. At the same time, precisely because of their personal approach, they manage to reach many different groups in society for whom science is often still unknown territory.

The Sisters in Science show that science and chemistry are accessible to everyone and thus unmistakably contribute to making chemistry and life sciences more inclusive at all levels.

The KNCV, the Royal Netherlands Chemical Society, has awarded the Van Marum medal since 1987 to individuals or non-profit organisations that have made a significant contribution to raising the visibility of chemistry, life sciences, biotechnology, process technology and its practitioners. The award (a medal and a certificate) is named after Martinus van Marum (1750-1837), a great networker and active communicator who in his time made knowledge of chemistry accessible to a wide audience.