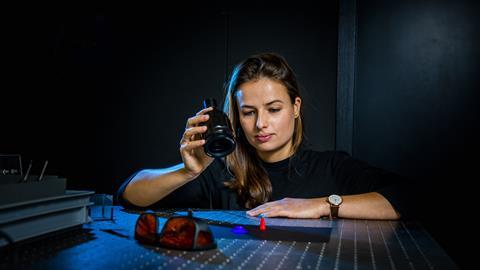 Marina and I entered the university bachelor’s program in Chemical Engineering in Eindhoven ten years ago along with about sixty other first-year students. I had lived in the Eindhoven region all my life so I stayed close to home, but Marina had relocated from Brazil and had only lived in the Netherlands since she was twelve. Her family moved for her father’s job at DSM and Dutch was her third language, after Portuguese and English. Undergraduate classes were in Dutch at the time, as were most of the conversations between students, which makes her accomplishments all the more impressive.

‘PhD students described it as the most stressful time in their lives, or complained that they were working alone all the time. It sounded like a nightmare.’

It is a happy digital reunion. We quickly look back at the past ten years, I explain that I am a journalist now and Marina tells how she became a PhD student. ‘I always said a PhD was not for me. PhD students described it as the most stressful period of their lives, or complained that they worked alone all the time. It sounded like a nightmare.’

Marina’s conviction faltered during her graduate research at Merck. All her supervisors were PhDs and she appreciated the way they thought about chemistry. ‘That wasn’t in my head yet and I couldn’t reach it either. I started thinking about it and began to see the PhD as a period of personal development. It was my quest to learn a way of thinking and problem solving.’

In the four years that followed, Marina was a PhD researcher in Albert Schenning’s group (Stimuli Responsive Materials and Devices, SFD). She developed polymers that respond to external stimuli, with a focus on liquid crystal polymers (LCPs). The group’s ultimate goal is to develop responsive polymers and integrate them into new devices.

Her research ranges from fundamental understanding about molecular structure to a soft robot that walks under the influence of light. ‘These molecules can absorb light and transform it into a mechanical deformation. We investigated how the molecular structure affects the material and were able to exploit those deformations in a functional way so we could build devices.’ She published in Advanced Science, among other journals.

‘My PhD was the best choice I could have made, but I was ready for something other than lab work.’

She is ultimately very positive about her experience as a PhD student. ‘It was the best choice I could have made. I was lucky that the group was such a nice environment. I got all the support I needed and was constantly encouraged to collaborate, share knowledge and develop personal skills.’

Researchers at the university work at the frontier of knowledge, Marina explains. ‘The robots we built were only proof of concept. You’re driving innovation for many decades to come.’ At Findest, she is a Technology Scout in the area of materials science and chemistry. The Amsterdam startup developed its own functional search engine and Marina uses that machine to help clients innovate. ‘A company is looking for a technology to achieve something or to solve a problem. We offer a scouting service to find the best technology for them to achieve their goals.’

There are many similarities between the research group and the small business. ‘The environment was and is friendly, helpful and open to discussion. Everyone has a voice, we try a lot and if it doesn’t work, we change it until it does and I’m still working on innovation.’ The differences are mainly in the day-to-day work. ‘I don’t do a project for myself anymore, I do it with a team and with clients. Your creativity has to fit within a certain framework and within the PhD I was freer. I read papers now, instead of doing the lab work and writing them myself.’

Ultimately, Marina wants to keep the balance between her professional and her personal life. She loves being in nature, preferably at the beach and in the ocean with a surfboard. ‘I see what losing that balance does to people. I want to maintain that for myself, and if I’m in a management role in the future, I hope to pass on that way of life.’