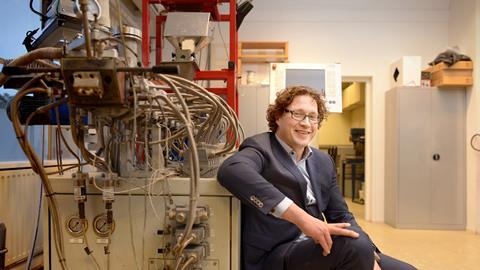 Whereas Mireille Kinket, his predecessor at the helm of the Polymer Science Park in Zwolle, has a master’s degree in chemical engineering, Gijs Langeveld must make do without an education in that field. Although he has two masters, with human geography and economics & geography (both at Utrecht University) Langeveld does not seem the most obvious choice to lead the PSP. But those who think that the forty-something doesn’t give a damn about chemistry are wrong. His interest - and now experience - in the field, as well as in the circular economy, may make the young entrepreneur just the helmsman the PSP needs now.

A geographer to lead a polymer center. How did that come about?

’My interest has always been at the interface of engineering and the rest of the world. So I started studying civil engineering and management in Twente. Although I eventually opted for economics and social geography, I was still interested in the interfaces with technology there too. One of my graduation projects was about the ports of Panama; that is a fairly technical subject.

But that is technology and we are talking about chemistry here.

‘The two fields have so much to do with each other. I have done many projects in the field of solid waste management - and I still do, by the way - and circularity is playing an increasingly important role in them. This is also something that is playing an increasingly important role in the chemical sector. Plastic packaging must be increasingly recyclable - eventually even 100%. And waste management also has a lot to do with chemistry.

How does a social geographer end up in the waste sector?

‘That happened by chance. I received an assignment from waste management company Circulus-Berkel, which does waste and raw materials management for nine municipalities. They had an assignment to place two hundred underground containers, thirty of which were in the city center. These are facilities that usually make no one happy, so it was expected that there would be considerable resistance. My job was to ensure that no one would lie about the placement of these containers. You have to look for win-win situations. Resistance was expected mainly from archaeologists, but in the end they were very happy because they were allowed to dig in the ground at thirty locations in the city. It’s true that this made the project take longer, but it did result in a win-win situation.’

And the step to chemistry? Where was it taken?

‘That step is not so big at all. Waste processing has everything to do with the circular economy and polymers play a major role in this. The plastic waste mountain must be reduced and there are many possibilities to recycle polymers. So those worlds overlap considerably.’

Langeveld gets up from his chair and walks over to a cabinet leaning against the wall. He grabs a bottle from it and shows it. It is an unremarkable, white-transparent, square plastic bottle.

’We developed this bottle for cleaning products from the Plastic Pact NL together with NVZ and we managed to close the chain. A professional wholesaler collects the used packaging, sorts and washes it. They are then compiled into granules, from which new bottles are made. This bottle is made from 100% recyclate. What’s special is that we got the whole chain involved and were able to close the loop.

But that’s more about policy measures than hard chemistry.

‘But that’s at least as important a part of the chemical sector. And that’s also what the PSP is good at: setting up collaboration between parties involved in chemistry. That direct cooperation between industry and other parties involved really appeals to me. And it’s also strongly focused on innovation and contributing to a nicer, more sustainable world. As far as I’m concerned, the aim should be to look for non-renewable resources. Recycling and reusing plastics plays a crucial role in this.’

For a more sustainable world, shouldn’t we get rid of plastic altogether?

‘Less dependent on polluting plastics, absolutely. But don’t forget that plastics also contribute to a more sustainable world: making a solar panel without polymers is damned difficult. And the same applies to the installation sector. Everything you need to live more sustainably contains materials with components made from polymers. Polymers are an essential part of the transition to a sustainable society.’

‘Absolutely. We have already sorted out the waste flows from paper, metal and glass. But don’t forget that we started with these 10 to 15 years earlier than with plastic waste. With plastic, we are still in the middle of the transition to sustainability. The point now is to look carefully at each step and see where we are going. We need to use more recyclate, use more bio-based sources and organize the chain more intelligently and efficiently.’

And what is the role of the Polymer Science Park in this?

‘The PSP has an important network function. We bring industry, government, knowledge institutions and other stakeholders into contact with each other. But we are also a knowledge and sparring partner. We know what we are talking about when it comes to polymers and we can apply that knowledge immediately by testing the material in our lab. Think about measuring the tensile strength and other important material properties. We also support entrepreneurs because we know the way to grant applications.’

‘I’ve just finished my first month here - and part-time too - but it’s definitely been good to me. There’s a really nice base here to build on. We have the right people and our participants have a very strong need for what we do. In five years, I see myself here at the helm of an organization that has slowly but surely grown by offering added value to our participants. But also an organization that is both firmly rooted regionally, and is also seen outside the Zwolle region as a leading innovation center for applied plastics technology in a circular economy.’

The Polymer Science Park (PSP) in Zwolle is an open innovation and knowledge center for applied plastics technology. It is a development and meeting place for business and knowledge partners and facilitates innovative projects. The PSP emphasizes a sustainable plastics sector, with recycling and circularity as key themes.