The Nobel Prize nominations are not yet out the door or the next big prize has been announced: Leiden’s professor Ewine van Dishoeck received the Niels Bohr International Gold Medal on 7 October for her work in molecular astrophysics and astrochemistry. 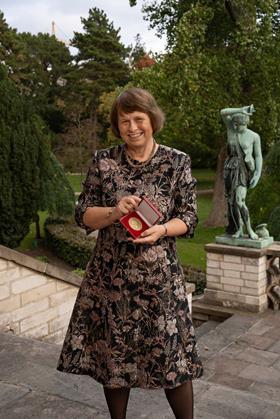 Her Majesty the Queen Margrethe of Denmark presented the prize on the birthday of famous physicist Niels Bohr to Van Dishoeck, making her the thirteenth winner. The ceremony took place at the Carlsberg Academy in Copenhagen, which also donated the corresponding cash prize of €100,000. Van Dishoeck is professor of molecular astrophysics and astrochemistry at Leiden University.

Through her work, Van Dishoeck has continuously pushed the technological boundaries for astronomical observations, space missions and laboratory experiments. She has played a leading role in the development of large telescopes on Earth and in space, including the Atacama Large Millimetre/submillimetre Array and the James Webb Space Telescope, which was launched on Christmas Day 2021 and has been providing spectacular images and data for several months. She has also been president of the International Astronomical Union, representing more than 10,000 astronomers from nearly 100 countries, and scientific director of the Netherlands Research School for Astronomy (NOVA).

For more on astrochemistry, see this article.