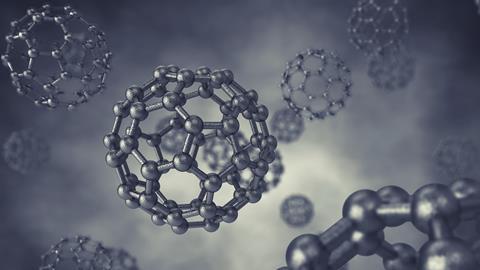 The space between the stars, the interstellar medium (ISM), is cold and very thin, but not completely empty: two particles collide there on average once every fortnight. So the ISM is not a place where you would expect to find much chemistry. Nevertheless, a lot of things happen there chemically and reactions in the gas phase and on cold icy dust particles provide an amazing chemical diversity. Using large telescopes, about five to ten new molecules are discovered in space every year. ‘We mimic pieces of interstellar space in the lab to find out what astrochemical reaction networks look like’

In the laboratory, astrochemists investigate how these substances can be created in space. ‘We mimic pieces of interstellar space to find out what astrochemical reaction networks look like’, Harold Linnartz, Professor of Laboratory Astrophysics at Leiden University, says. ‘These are the pieces of the puzzle that should give us a picture of the universe as a reaction vessel.’

Around 250 different molecules have now been discovered in space, small and large, stable and highly reactive. To do this, telescopes such as the Atacama Large Millimetre Array (ALMA) or the Herschel Space Telescope scour the sky for spectral data that correspond to analysed laboratory data. ‘An important class of molecules here are the polycyclic aromatic hydrocarbons or PAHs’, says Linnartz. Such molecules consist of five- and six-ring carbon atoms and are formed when stars eject large amounts of material at the end of their lives, a bit like a glowing cosmic candle.

From these PAHs other molecules are formed. When radiation in space hits the PAHs, they fragment and create molecules that do not exist on Earth. They first lose mainly hydrogen atoms. You then get dehydrogenated PAHs, often with a multitude of isomers, until a graphene-like molecule remains, a PAH without hydrogen atoms. At the same time, and especially afterwards, C-atoms disappear and the flat PAH can start to curl. Linnartz: ‘If you start with very large PAHs (GRAND-PAHs), then fullerenes such as C60 and C70 can form.’ Fullerenes are also known as buckyballs, after their symmetrical spherical shape and the resemblance to the geodesic dome of architect Richard Buckminster Fuller.

We have known since 2010, thanks to the measurement results from the telescopes, that these complex molecules do indeed occur in the ISM. ‘Smaller fullerenes and even long carbon chains such as C11 and C15 can also form during these reactions, but these have not yet been identified in space’, says Linnartz. ‘It is also not clear how you make a linear molecule with eleven C atoms from a PAH.’ For the past two years his Icelandic postdoc Helgi Hrodmarsson has been working on this matter as part of a Marie Curie Fellowship from the European Commission. 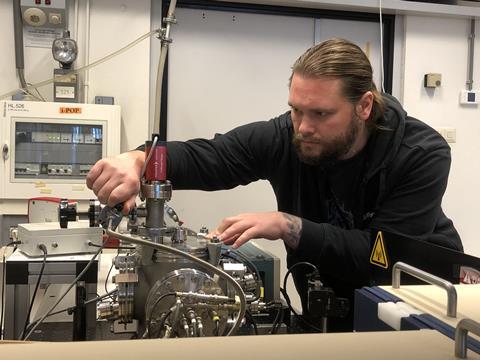 To study the chemistry of these molecules, the researchers irradiated the PAHs in an ion trap with different colours of light. In this way, the fragmentation behaviour of large PAHs could be studied under fully controlled conditions. Linnartz: ‘We start with PAHs with seventy or more C-atoms that are commercially available or have them synthesised, for example in Leiden by our organic chemists.’ The researchers use an instrument that was built seven years ago especially for this research: i-PoP (instrument for Photodynamics of PAHs). It is a vacuum setup with an ion trap and a time-of-flight mass spectrometer. Charged PAHs trapped in the trap absorb laser light with photons ranging from deep UV to optical and infrared wavelengths. By subsequently opening the trap, it becomes clear which fragments were created in the process.

An interesting discovery was that the large PAHs are more resistant to dissociation than the smaller molecules. It seems that the symmetry of a PAH also plays a role in the interstellar dissociation process. Another striking conclusion was that most PAHs keep shedding a C2 unit, making them smaller and smaller until they reach a mass of 384 amu, a molecule with 32 C atoms. After that, fragmentation results only in much smaller molecules. ‘Because this behaviour is universal, it could indicate that smaller fullerenes are more common in space than you would expect,’ says Linnartz. ‘We cannot prove this yet, because as yet no spectra have been measured in the laboratory. 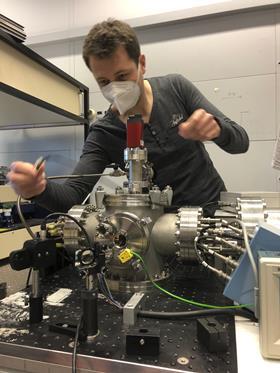 Much astrochemical research assumes that larger complex molecules are formed by allowing smaller ones to react with each other, for example on icy dust particles. But PAHs offer a top-down scenario. ‘What makes this research special is that we actually start with large molecules and look at how they are broken down. In the past we have shown that GRAND PAHs can be converted into fullerenes and it is quite possible that many other PAH-related molecules exist in the universe. As yet, we have found nothing that contradicts this hypothesis’, says Linnartz.

The special thing about i-PoP is that it is a mobile setup, which means that it can not only be used in Leiden with ‘normal’ lasers, but also in other locations with different light sources, such as the synchrotron SOLEIL in Saint Aubin or at the Free Electron Laser FELIX in Nijmegen. Linnartz: ‘In the past, we travelled there several times with i-PoP, but unfortunately, due to COVID-19, we could not measure at other locations recently.’

A next step in this astrochemical research is to find out more about which different PAHs are present in space, says Linnartz. The available spectra give a lot of hints but are not yet conclusive. For example, do nitrogenous PAHs, the so-called PANHs, occur in space? We may learn more about this in the not-too-distant future, because the measuring instruments of the recently launched James Webb Space Telescope operate at precisely the wavelengths where PAHs are very visible and, moreover, this telescope is extremely sensitive. Because the JWST measures outside our atmosphere, spectral contamination from other substances is not possible.’