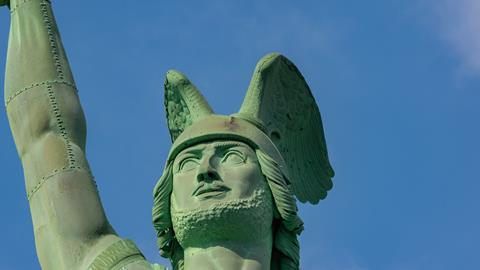 Trace elements in Roman artefacts found near the village of Kalkriese in northern Germany reveal that these belonged to soldiers of the Nineteenth Legion. It implies that the legendary Varus battle in the Teutoburg Forest actually took place way outside that forest, according to Prof Michael Prange and PhD student Annika Diekmann of the Deutsches Bergbau-Museum in Bochum.

Their conclusions (not yet officially published) follow mass spectrometric analysis of bronze and brass objects, such as buckles and cloak pins. Their approach strongly resembles recent MS-based research by scientists in Amsterdam, which showed that the gold leaf on the Dutch ‘Gouden Koets’ (the royal gilded coach) was mined in Surinam.

Prange and Diekmann compared the bronze and brass composition of the finds at Kalkriese with the composition of other objects that have been attributed with certainty to a particular Roman legion. The underlying assumption is that each legion was responsible for its own metal supply and that supply was reused over and over again. As a result, the elemental composition remained almost constant for decades.

The project was stimulated by the ongoing discussion on location of a legendary battle in AD 9, in German known as the Varusschlacht (Varus Battle). In that clash, rebellious Germanic warriors led by one Hermann (or Arminius) decimated the Seventeenth, Eighteenth and Nineteenth Legion of Roman general Publius Quinctilius Varus. It marked the beginning of the end of the Roman presence in present-day Germany, where the massacre is considered a highlight in national history.

It has long been assumed that the Varus Battle was fought near Detmold, in what is now called the Teutoburg Forest. A huge statue of Hermann was erected here in 1875 to commemorate the battle. But remains of a Roman battlefield were also identified in Kalkriese, more than 50 kilometres to the northwest. Nowadays, most historians think this is the actual site of the battle. However, some maintain that Kalkriese was merely the scene of a Roman retaliation in AD 15.

The researchers analysed around 550 samples from seven known Roman legion sites. In one of them, at Dangstetten near the present-day German-Swiss border, the Nineteenth was stationed until 8 BC. Using the concept of ‛metallurgical fingerprinting’, the metal from Dangstetten turned out to be highly similar to that from the Kalkriese site, while being clearly different from that of the other sites. Conclusion: The Nineteenth Legion must also have been active at Kalkriese. And that must have been during the Varus Battle, because afterwards, the Nineteenth simply seized to exist.

News item from the Bergbau-Museum (German and English)