Oxidised metals also appear to be able to take on an active role as catalysts for CO2 conversion, contrary to what scientists had previously thought, Utrecht researchers report in Nature Communications. 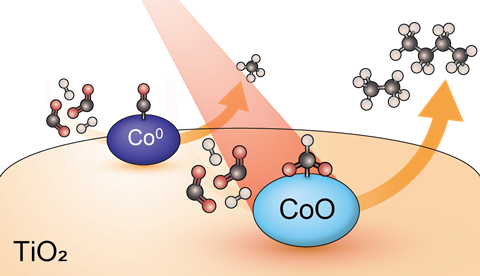 The efficient conversion of CO2 into fuel has been a challenge for a long time. Usually, you use metallic catalysts, such as nickel, palladium or platinum, but in recent years it has become clear that not only metallic cobalt (Co) is a good candidate for this, but also its oxidised form (CoO). Iris ten Have, Bert Weckhuysen and colleagues now show how the reaction mechanism works and that CoO performs even better than Co.

Cobalt itself can catalyse carbon compounds quite effectively, as can be seen in the Fischer-Tropsch synthesis (FTS), where you convert CO and H2 into short hydrocarbon chains. The researchers looked at a similar process in which you convert the almost inert CO2 with nanoparticles (in this case ±10 nm). In this process, the oxidation state of cobalt, the cobalt phase, and the support oxide also determine the effectiveness of the conversion. In this case, they focused on reducible (TiO2 and CeO2) and non-reducible (SiO2 and Al2O3) metal oxide supports and thus on the cobalt oxidation state.

In the hydrogenation reaction of CO2 with cobalt, the conversion starts with the so-called reverse water-gas shift, which can start in two ways depending on your catalyst. Either the direct dissociation pathway, or the hydrogen-assisted pathway. The researchers investigated the effects of the aforementioned variables with ME DRIFTS. It appeared that metallic Co catalysed the reaction via the dissociation pathway, while CoO chose the H-assisted pathway (see the image).

The best catalyst/support combination turned out to be CoO/TiO2, and by adding a little CO to the CO2 in the ratio 1:2, the selectivity for hydrocarbons longer than two C-atoms (C2+) went up from 11 to 39%. This finally resulted in a total C2+ yield of 104 mmol∙h-1∙gcat-1 at industrial conditions.

Not only is this an interesting discovery for the conversion of CO2 to longer hydrocarbons, but also on a fundamental level. In the conclusion, the authors call the discovery ‘a paradigm shift in the classical view of the catalytic active phase’, because apparently, oxidised metals can also catalyse excellent reactions. In practical terms, the reduction of catalysts (which takes place at high temperatures) may therefore not always be necessary, because the oxidised state may work even better than the reduced one. In any case, it invites us to take a closer look at current catalytic processes.