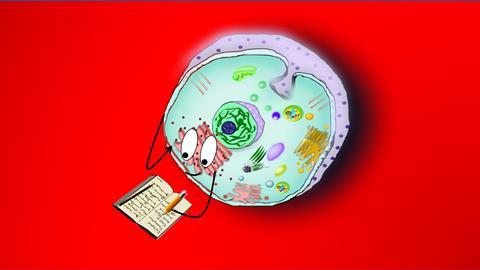 Biological diary of a cell created

With CRISPR-Cas1 and Cas2 and retrons you can keep track of the transcription history in a population of cells in a kind of log. Americans write this in Nature.

The biological cell is a very complex entity in which all kinds of events take place. One of the events in a cell is gene expression, in which DNA is read and converted into a protein or a functional RNA molecule. Gene expression is something that bioengineers would like to record, preferably while the cell is still alive. Santi Bhattarai-Kline, Seth Shipman and colleagues from Gladstone Institutes and UCSF developed a way to record the transcripts in a cell chronologically using a CRISPR array and a ‘retron’.

The researchers made retrons – a piece of DNA encoding reverse transcriptase and a unique single-stranded DNA/RNA molecule – that produce compact specific molecular tags. These tags can be brought under the control of other pieces of DNA, so-called promoters. When such a promoter is active, the tag sequence is transcribed into RNA and then converted back into a kind of DNA receipt by the retron reverse transcriptase (RT). This loose piece of DNA then binds to Cas1-Cas2 and enters the CRISPR array after the first spacer.

If after that another promoter becomes active, this sequence repeats itself but with another piece of DNA that ends up in the CRISPR array. This way, you get a linear chain of DNA fragments in the array that stores the transcripts in a chronological way. The researchers have dubbed this biotechnology ‘Retro-Cascorder’.

In the Nature article, Shipman and colleagues show how they can record the expression of two different genes. The data remains very well preserved, even after eighteen cell divisions. Only after about 45 divisions did the sequence start to deviate somewhat.

In terms of applications the Americans are thinking of ‘living biosensors’ that can monitor the environment. Follow-up research could look at modifications to this system that would allow the presence of pathogens or metabolites to be recorded. In any case, they want to use it to record more complex cell events in the future.