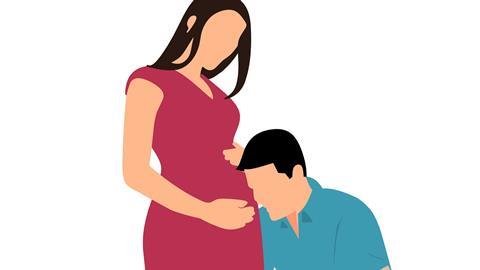 PhD students and postdocs working in chemical laboratories at Wageningen University & Research (WUR) will find it much easier to extend their contracts from this year onwards.

Women who work with chemicals have to stop practical laboratory work immediately if they become pregnant, because many substances are harmful to the unborn child. This means sudden costs for the head of the research group, who usually does not want to or simply does not have the budget. This makes young women hesitant: should they wait to get pregnant until after their postdoc (which can take up to eight years), let their scientific career slip away or take the risk? When this happened to one of Han Zuilhof’s PhD students - a professor of organic chemistry at WUR - he started lobbying for a better approach. After five years, he was successful, says Zuilhof.

’This PhD student, Annemieke van Dam, got pregnant in her first year, she had only been working for 10 months’, Zuilhof says. As soon as she found out, she had to stop working immediately. In addition, the UWV regulations said that she could not do any substitute work related to her thesis, not even theoretical or mathematical work. There are already rules for women on permanent contracts, but not for those with temporary contracts – i.e. PhD students and postdocs.

’If you want to bring chemistry into the 21st century, you have to do something about this’

Zuilhof’s first attempts to raise this issue did not go smoothly. After several years of being sent from pillar to post, he raised the issue with the Sector Plan Beta committee. ’I had announced that I was going to raise the issue there, but I was strongly discouraged from doing so’, Zuilhof says. ’But I thought: if I won’t do something now, nothing will ever happen.’ Much to his relief, the plan was very well received, and with Rector Magnificus Arthur Mol in attendance, things quickly got moving.

Together with Diversity & Inclusion Officer Eva Siebelink – who, among other things, translated the plan into precise ‘bureaucratese’, says Zuilhof – he drew up a plan. ’There are two additional costs: if a doctoral student gets pregnant in the first year, the extension follows in the fifth or sixth year. In these last years, of course, the salary is higher and inflation also comes into play, so a PhD student costs more money. In addition, we see that full-time AIO and motherhood are often difficult to combine, resulting in more part-time work, which in turn costs more time and therefore more money. The second cost is the infrastructure part: the depreciation of equipment, the occupation of a few square metres of laboratory space and the fume cupboard, which is also not reimbursed by default.’

‘The hope is that this plan will be taken up elsewhere’

The new system will change that. Zuilhof: ’There is now a fund at WUR specifically for these costs. It is actively used to extend the contract of the pregnant doctoral student, so it is not used for lab trips or anything like that. If the PhD student knows this, it removes the uncertainty associated with pregnancy (planned or otherwise). If you want to bring chemistry into the 21st century, you have to do something with this. In other disciplines it’s a little bit easier, in chemistry we just have to work extra hard to get it right, and with this policy we’re doing that a little bit better.’

Not all universities work in the same way when it comes to funding, but they all face this problem, Zuilhof says. ’The hope is that this scheme will be taken up elsewhere, like other universities and institutions. In any case, I am very happy that it has succeeded, as is my PhD student Annemieke van Dam. I just admire her: always carrying on calmly and continuing to do good science, sometimes in between feeding and counselling: such go-getters make my efforts more than worthwhile!’