Using the now famous optical tweezers from Nynke Dekker’s group, it was recently shown that certain sequences on the genome bring the mobile start proteins of DNA replication to a halt, which is crucial for the start of DNA duplication and cell division. 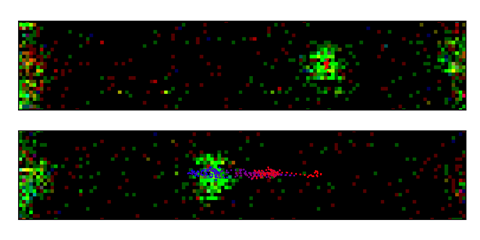 DNA replication is one of the first steps in the complex process of cell division. In the process, genetic material is doubled, pulled apart, and each copy ends up neatly in its own cell during cell division. It is broadly clear how this process proceeds and we know dozens of proteins that are involved, but many details are still unknown.

The group of Nynke Dekker at TU Delft, in collaboration with researchers at the Francis Crick Institute in London, has now shown in Nature Communications that the protein with which DNA replication starts, called ORC, moves quickly across the chromosome and stops at DNA sequences with which ORC was known to have a high affinity. The fact that ORC stops at these specific sequences ensures that, among others, the proteins Cdt1 and Cdc6 are recruited, after which so-called MCM-helicases in the S-phase of cell division (the phase in which the actual DNA duplication takes place) make the DNA accessible to the replication machinery.

Dekker’s group made use of their “optical tweezers,” which have previously led to groundbreaking publications. The combination of this single-molecule optical trapping and confocal microscopy produced images like the one above. The ORC protein is labeled green and is attached to DNA (not ligated). The dashed lines show the trajectory of the protein (blue represents the initial time, red the later time). In the upper plane, the ORC protein is static and bound to the origin of replication throughout the observation period. In the lower plane, the ORC protein diffuses randomly on the DNA until it locates the origin.

The researchers also discovered that the MCM helicases can stably bind to DNA not only in their classical double hexa form, but also in the hitherto unknown single hexa form, uncoupled from ORC. It is possible that MCM helicases and their form of appearance play a greater role in the initiation of DNA replication than previously assumed, the researchers speculate.