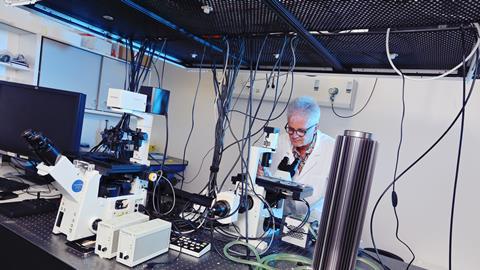 Cees Dekker is driven by wonder

Halfway through his career, Cees Dekker reinvented himself. After years of hardcore physics, he shifted his focus to ‘nanobiology’ at the turn of the millennium. A term he coined himself, as a matter of fact.

Nanoscientist Cees Dekker is an amiable and flamboyant man who appears much younger than the 62 years he actually is – fashionable glasses, psychedelic shirt, engaging smile – but not one to waste time. He takes his time, but no more than necessary. Questions he finds less interesting, he either dismisses or answers with in a standard way at lightning speed; questions that he do spark his interest are answered enthusiastically halfway through the question. It’s as if he’s running out of time and he can’t wait to let me share in all the beauty that goes on in and outside his lab.

The biophysicist from Delft – who has been one of the most cited scientists in the Netherlands for years – takes his responsibility to contribute to the explanation and popularisation of his work at the border of physics and biology extremely seriously and regularly appears in the media; if not to talk about his work, then about the relationship between science and his Christian faith. He also found time to write several books, send almost forty thousand tweets and lead a successful research group at Delft University of Technology. ‘It doesn’t feel like work’, he says. ‘I’m just terribly curious.’

Let’s first look back at the moment when you decided to shift your focus from superconductivity and nanotubes to biology at the end of the 1990s.

‘Yes, I understand people were surprised at the time. At the end of the nineties, when I was in my forties, I was Professor of Molecular Electronics and I have to admit that it had become a bit bored, I didn’t learn much any more. The field went more into the application side, how you could integrate nanotubes into electronic circuits. Very cool, but that wasn’t really where my interest lay. I wanted to pioneer and I had the feeling that was no longer possible, because the most interesting fundamental insights had already been uncovered. But my field had developed many exciting new tools to measure individual molecules. I decided that I wanted to apply this to biology, to look at it from a physical point of view.’

Wasn’t that a great risk for your career as a scientist?

[Laughs] ‘It was definitely a great risk! At the time, I was well aware that it could go wrong and that I could become much less successful, but I just ignored that. Curiosity has always been my strongest driving force. And luckily it all worked out.’

I can hardly imagine how I, as a geneticist, would be able to learn fundamental physics, let alone compete at the top. How did you go about it?

‘It was simply a matter of picking up a book on cell biology and starting to read. I had come from a world of ultra-high vacuums, cryostats and quantum phenomena, and now I was working at room temperature with molecular biology kits. It was a very interesting time, during which I received a lot of support from Delft University of Technology, where I was a professor at the time, and I started several collaborations with molecular biologists. That helped me learn a lot.’ 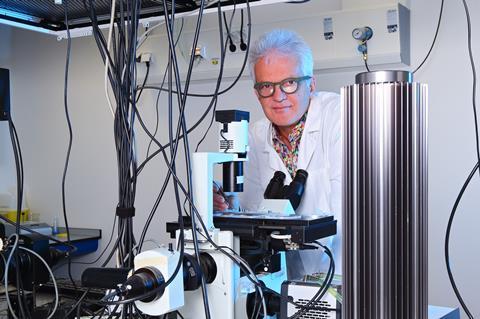 How long did it take before you started considering yourself a biophysicist?

‘At first we looked at biological systems with a physical view and acted on the basis of the tools we knew. It took a few years before we started working more on the big biological issues. I then started to call it nanobiology, a term that did not exist at the time. Microbiology has only been around for a century, since we started to study micro-organisms more seriously. I thought nanobiology was an appropriate term, because all molecular biological relevant interactions take place at the nanoscale: a protein is a few nanometres in size, DNA is 2 nm thick.’

Your research portfolio is very diverse, but there is a common thread…

Almost everything you do revolves around the mechanistic properties of proteins and DNA.

‘Yes, that is about right. I search for a physical understanding of biological systems in a bottom-up way. I think you could distinguish three lines of research in my group at the moment. The first concerns chromosome structure: how do you get a metre-long DNA polymer folded and organised in such a microscopic cell? We have developed visualisation techniques that allow us to study how, for example, SMC proteins loop DNA (video on Youtube) in order to build up chromosomes. This also shows our physical background. We also call this project the ‘genome-in-a-box’, an analogy of the ‘particle-in-a-box’ in physics. In simple terms, it means you strip a chromosome of everything on it, put it in a box, then add an element to it one by one – such as an SMC complex, helicases or topoisomerases, for example – and observe what will happen.’

What other main lines of research could you name?

‘The second is nanopores, which is our oldest line of research and which has now led to DNA sequencers based on nanopores. We pull individual DNA strands through a nanopore and can then read off the nucleotide sequence. Very recently, we even managed to read out a single protein for the first time using this technique. But this line of research is not only about developing tools, but also about real biological questions. For example, we look at the nucleopore complex, a gateway between the cell nucleus and the cytoplasm. This is a very complicated system and therefore difficult to study in a cell, so we use biomimetics. We reconstruct holes and then insert individual elements of the nucleopore complex to study transport through it at the single-molecule level.’ 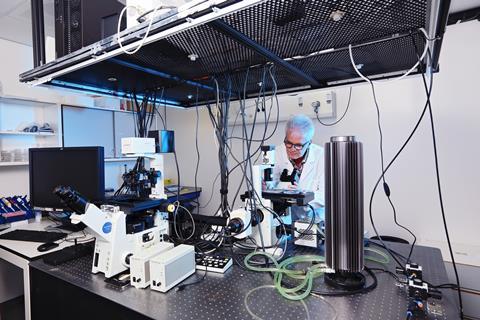 And the third line of research?

‘That concerns the synthetic cell, as part of the Dutch BaSyC initiative. Craig Venter looked top-down in those days and identified about five hundred genes that are minimally required for a functioning cell. We want to look bottom-up: how do we move from a few molecules to a complete biological system? That is a dream of mine and we set to work with a delicious dose of naivety. This is something that will probably yield spectacular results in the longer term, but that does not matter. You should not only want to work on the questions of tomorrow, but also on the questions of the day after tomorrow.’

‘Yes, but as a scientist you’re allowed to be, and you can add it to the curiosity we were talking about earlier. What makes living systems so different from non-living systems? I find this question immensely fascinating. You can make a list of elements such as metabolism and the ability to reproduce, but such a list is ultimately not very satisfactory. What distinguishes biology from chemistry is that these components together make up a living system. The secret of said life, I think, lies in the interactions, the interplay of those molecules. The big question about the origin of life is still unanswered. How did we ever evolve from simple molecules into the extremely complex systems we see today? We have no idea. I want to work on these kinds of big, open questions.’

‘The secret of life lies in the interactions between molecules’

You are a Christian. If you could make such a synthetic cell, would you be one step closer to God, or would the role of God have diminished somewhat again?

‘The fantastically subtle way in which elements in nature function never ceases to amaze me. If we solve the puzzle of how life came into being, I expect that my amazement at the complexity of creation will have increased and with it my awe for the greatness of the Creator.’

You regularly get involved in discussions about science and faith. You have also written several books on the subject. Don’t you think that at some point we will know everything and that God’s role will be over?

‘The idea that there is such a thing as a beginning, a big bang, is already an interesting signpost to consider that there was a creator. But more generally, and on the basis of pure rationality, I also arrive at a Christian interpretation of reality. An atheistic worldview is a naturalistic worldview: fundamentally, there are only atoms and natural forces that we can measure. But how do morality, the dignity of the human being, my experience of the meaning of life, follow from the movement of atoms? A purely naturalistic perspective fails here; a Christian perspective, I think, is a much more reasonable way to interpret these aspects of reality.’

Afterwards we spoke again briefly because Dekker felt that our discussion of his faith quickly became purely philosophical, whereas it also concretely helps him in his work.

‘I am driven by wonder and questions. On a material level I find answers in physics, but I experience my deepest happiness with God. That faith also drives my science and how I deal with people. As a human being, I have the biblical assignment to explore and use everything in creation for the benefit of my neighbour. I do not experience any conflict between faith and science. On the contrary, my faith stimulates me to do science, to be open-minded in the world.’

Don’t you ever get tired of the questions about the supposed conflict between faith and science?

‘No, certainly not, because I think it is important. After all, what could be greater than questions about God?’

2005: Publication of book Beautiful accident or signs of design?

2014: appointment as Knight in the Order of the Dutch Lion