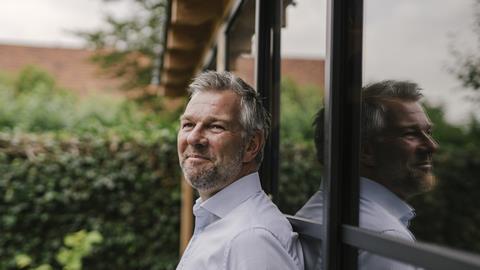 Unexpectedly, Pfizer chief Marc Kaptein became one of the faces of the COVID-19 pandemic. We spoke to Kaptein about the technology of the mRNA platform and the price of vaccines, among other things. ‘I dare to challenge the idea that mRNA technology is expensive; I think you should speak of valuable.’

After a short career in gynaecology and obstetrics, Marc Kaptein sought ‘the innovation-driven side of medicine’, as he puts it himself. He found it in the pharmaceutical industry. At the moment, he is the Dutch medical director of Pfizer, the pharmaceutical company that, with its mRNA vaccine technology, symbolises the way out of the covid pandemic for some but ‘big pharma’ for others, which by definition cannot be trusted.

Despite the responsibility Kaptein feels and the pressure he has been under for months, he appears remarkably relaxed and regularly takes time to speak to the media. This is a conscious decision, he says. ‘From the start, we felt we could make a positive contribution to the willingness to be vaccinated and we wanted to do our best to achieve this. This has led to proactive openness on Pfizer’s part. But it’s also demanded of us by the public, who are looking for information, who willingly receive it from our hands. If we wouldn’t do this, it would lead to distrust which we wanted to avoid as much as possible.’

‘If a variant appears against which the vaccine is ineffective, we can update the vaccine within a hundred days’

The maturity of your new vaccine technology based on mRNA seems to have come just in time. How did that happen?

‘The development process started back in the 1990s, which many people don’t know; we just sped up at the end. One of the biggest challenges was the strong immune reaction against the injected RNA. Although RNA is a compound that is found naturally in the body, you normally don’t see it outside the cell; the immune system then attacks it and wants to get rid of it. We solved this by replacing uridine in the RNA with pseudouridine (see box, ed.). This insight came about two years ago. The second challenge concerned the nanoparticle, the lipid capsule surrounding the RNA. It is essential that it fuses efficiently with the cell membrane so that the mRNA can enter the cell. Only recently have we succeeded in finding the precise composition of lipids that makes this process run smoothly.’

Simultaneously with Pfizer/BioNTech, Moderna has also developed an mRNA vaccine. How does their vaccine differ from yours?

‘Actually they do not differ substantially. Moderna was several months ahead of us, so they had already been able to carry out stability studies and thus had a better insight into the exact storage conditions of their vaccine. We were only able to do these studies when our vaccine was already on the market, which is why we had to go for the storage conditions that were most practical and feasible, namely -70°C. But in the meantime the stability of the nanoparticles has proved better than expected. We now know that we can transport it at -20°C for a fortnight. This is not trivial: at -70°C you need dry ice, of which only a limited quantity may be transported by air for safety reasons. We have also extended the storage period at refrigerator temperature from five days to a month.’

Is this still the same vaccine you started with?

‘Yes, the composition is exactly the same. But we didn’t have the stability data to begin with. Of course we can’t afford to tinker with a vaccine that works well in the middle of a pandemic, even if it’s only the capsule. I don’t exclude the possibility that we will further refine its composition in the future, but that will require another phase three study. We are not going to do that now. And we don’t need to, for that matter.’

We now know the figures on the high effectiveness of the mRNA vaccines. What are the other advantages?

‘In the first place, the technology can be quickly adapted. With a rapidly mutating virus like the coronavirus, that is a huge advantage. If a variant appears against which the vaccine is not effective, we can update the vaccine within a hundred days. Secondly, there is scalability. Once you master the technology, you can make a lot of it very quickly. We had initially hoped to be able to produce about 1.2 billion doses by 2021, but by voluntarily licensing the technology and working with companies like Novartis and Sanofi, we have now reached about 3 billion. And next year 4 billion.’ 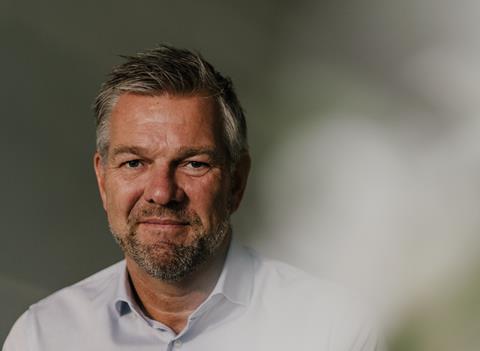 That is with the knowledge of today, but several other large pharmaceutical companies, including GSK, the world’s largest vaccine producer, have stopped using the technology because they could not get it to work.

‘Essentially, we, together with BioNTech, took a very big gamble by continuing on with it. What helped is that we have had a new CEO for a year and a half who is into bold moves. He quickly saw that this could be an important opportunity for Pfizer and was prepared to take the risk. And to give you an idea: that was a $ 2 billion risk. Something like that can go wrong.’

But now you’re going to make a lot of money out of this.

‘Yes, that is true. We are also open about that. On the one hand, of course, we have to keep the shareholders happy: we are a commercial company that has to make a profit. On the other hand, we have said from the start that we want to take social responsibility. That’s why, in 2021 alone, we will offer a billion doses for middle-income countries at a reduced rate and for low-income countries at production cost.’

mRNA technology is new and expensive. Do you expect the price to go down quickly due to success and the scalability?

‘I’d like to challenge the notion that it’s expensive. I think we should speak of valuable. Many other vaccines, for example against pneumococcal disease or meningitis, are more expensive than our mRNA vaccine against SARS-CoV-2. And most of the profit we make goes back into R&D for new medicines. We are currently working on a virus inhibitor, a cysteine-like protease inhibitor, specifically against coronaviruses. Something like that does not exist yet. This year we have invested € 600 million in it. Hopefully, the first data will be available in the fourth quarter of this year and we may then be able to speed up the approval process. A virus inhibitor like this could help the world by cushioning the next wave, or by protecting people for whom a vaccine does not work properly.

The patents of the mRNA technology are with the vaccine developers. You have previously said in the media that you are an opponent of releasing the patents, as some would advocate. Can you explain that position?

‘Lifting patents doesn’t solve a number of other problems. The raw materials are scarce, especially the lipids for the nanoparticle; there are only a few parties who can produce them. We also have to make the nanoparticles in exactly the right size using a kind of improved microwave oven. And until recently we could not produce mRNA in such large quantities. All those machines didn’t exist last year. And, of course, you need highly trained staff and complex production facilities. All these factors are currently in short supply. If you release the patents, you will see that the demand for these scarce resources will increase and that they will initially be used less efficiently by new producers. It is a real risk that would mean that, on short term, fewer vaccines would be available.

On the long term, it is a different story, but then there will probably no longer be a pandemic. So you have to ask yourself whether suspending patent protection would really be beneficial. It also means that the pharmaceutical industry would be less inclined to invest in new technology if they run the risk of having a patent taken away from them, so to speak.’

Will we see mRNA technology for other vaccines as well?

‘Before the COVID-19 pandemic, the plan was to first launch a flu vaccine based on the mRNA platform. We have been working on that with BioNTech since 2018 and are still working hard on it. This autumn we will enter a phase three study. The mRNA technology is particularly suitable for rapidly mutating viruses such as influenza and SARS-CoV-2. For now, that is where the added value lies. In the longer term, it will certainly be used more widely, although I wonder whether we will ever replace some of the existing, highly effective and safe vaccines. I think there will always be a mix.’

What comes after the mRNA platform?

‘Development will certainly continue. Besides the current technology based on modified mRNA, we had two other candidates with unmodified mRNA and self-amplifying mRNA (saRNA, ed.). The second, as mentioned, resulted in an undesired immune response; the third is still promising, but is much more complex. saRNA has not yet crossed the finishing line, but remains interesting and we will certainly continue to invest in it. The great advantage of saRNA is that it multiplies itself in your cells. We think that this can save a factor of fifty in terms of the dose. Just imagine what it would mean in a pandemic situation if you could make fifty times as many vaccines. We would already have had more than enough doses for the entire world population.’

One dose of the Pfizer/BioNTech vaccine consists of huge amounts of nanoparticles, which are capsules of cholesterol and three more complex lipids. Inside a capsule there is a buffer and a limited number of mRNA fragments, the active ingredient. One mRNA fragment is 4,284 nucleotides long and consists of five elements:

Replacing the usual uridine nucleotide in the RNA by pseudouridine turned out to be crucial to reduce the immune response to the foreign RNA (i.e. not the spike protein that is supposed to provide immunity, but the primary response to the RNA vaccine itself).