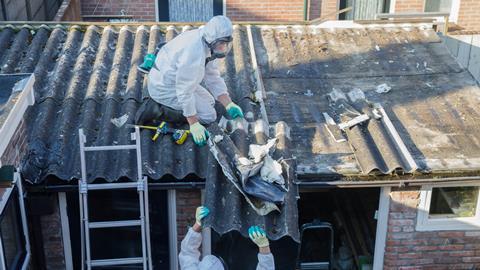 Solution for asbestos at hand

The company Asbeter Holding is developing a process that breaks down asbestos to the last fibre. And it does so using only water, electricity and the chemical properties of the material itself. The final product is also reusable.

‘Every year there are still at least twice as many asbestos victims as traffic victims,’ states Inez Postema, CEO and founder of Asbeter Holding. ‘In addition, we are barely getting rid of asbestos.’ Currently, landfills are usually the last destination for asbestos-containing building materials, including roofing sheets. Destruction by incineration or grinding, for example, is very expensive, environmentally unfriendly and does not guarantee an asbestos-free final material. Postema: ‘You could say that the world has a serious asbestos problem. But since May this year, we can say with certainty that we have found the solution.’

This claim does not come out of the blue. For four years, Asbeter has been working on a way to completely degrade asbestos. In 2018, Postema worked as a sustainability consultant at Deltalinqs, a business association of the Rotterdam industry. ‘I was working on making industrial processes more sustainable. During a conference I organised, we were brainstorming about the impact of weakly acidic carbon dioxide on minerals. Asbestos is also a mineral. And so we figured out that acids might well dissolve asbestos.’

The Asbeter Acids project was born. The principle worked reasonably well, but the process turned out to be very expensive. ‘Very unfortunate, of course, but it was not a waste of time,’ Postema says. ‘In those three years, we learned a lot about how asbestos fibres behave and where their weaknesses lie. Pretty soon we came up with the idea of doing things 180 degrees differently. What if, instead of adding acids, we turned it into an alkaline environment?’ The latter is quite simple to do: adding water to cement results in calcium hydroxide.

‘We can say with certainty that we have found the solution’

This switch proved to be a hit, according to Postema. ‘We have now completed twenty major tests. These involved examining samples of our final material under a scanning electron microscope at 5,000 times magnification. In these, not a single asbestos fibre could be seen.’

The alkaline process was named AC Minerals: after the active and circular nature of the whole process. Degradation takes place in three steps. ‘The first consists of mechanical pretreatment of cement, so we create a bigger reaction surface,’ says Angelo de Jong, head of R&D at Asbeter Holding, who joined the team 1.5 years ago. ‘Then we add water and heat the slurry, after which the solvation reaction starts. Finally, in the third step, the pH is at its peak of 12.5 and the reaction is accelerated to the maximum.’

So only water and electricity are needed in this method. No expensive and environmentally unfriendly chemicals. One part of the water will be reused, the other is needed for the final product (calcium silicate or calcium carbonate with activator) as a raw material in the cement industry.

‘The industry is currently under great pressure due to the so-called Concrete Agreement, in which it was agreed to limit the release of CO2 in this industry,’ Postema says. ‘We contribute by supplying an alternative raw material, saving at least 50,000 tonnes of CO2 annually.’ The patent for the method is pending, as is ISO certification. Pilots are already running, but rapid scale-up is also on the agenda.

‘It is still possible to save energy here and there’

‘We understand that our claim is pretty strong,’ Postema admits. ‘so we’ll have to show something. By the end of 2023, we want to start building a large plant, for which we are considering the port of Rotterdam and all the regional municipalities.’ The AC Minerals Plant should be operational by early 2025, processing about 75,000 asbestos concrete roofing sheets and pipes per year. Together with the alkaline liquid, this will then annually produce between 300,000 and 375,000 tonnes of raw material in slurry form for the cement industry.

Meanwhile, the company is also working on the logistics for astbestos collection in airtight flat bags and on some process-technical improvements. ‘I also think it is possible to save a bit more energy here and there,’ De Jong says.

For now, all funding still comes from subsidies, own investments and contributions from project partners. But now, according to Postema, it is time to attract venture investors and, finally, banks. ‘I have no doubts about our business case or about proving the technology. And neither do others. We are already getting signals that manufacturers trust our technology.’

An asbestos-free future lies ahead, if it is up to Postema and her colleagues. Starting in the Netherlands. ‘Our government has always led the way by saying: we want those asbestos sheets off the roof. It also has policies on looking for alternatives in hazardous waste streams. This states, among other things, that if a party comes up with an affordable, sustainable and efficient solution to completely eliminate asbestos from asbestos cement, there will be a total landfill ban. We now believe to be that party.’