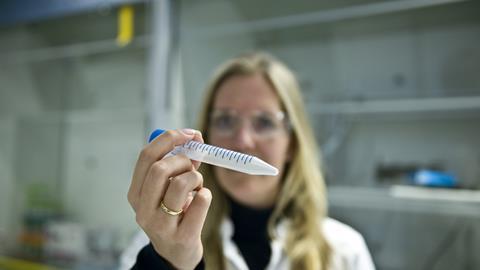 SusPhos exists only three years, but was crowned Frisian Start-up of the Year 2021 already in September. How will the chemistry of SusPhos contribute to a better world?

Phosphate compounds are an important component of fertilisers and thus indispensable for global food production. There is no alternative to phosphate and the chemist Isaac Asimov warned of a shortage as early as 1959. At the moment, Western Europe obtains its phosphate mainly from phosphate mines in Morocco, China and the US and is therefore strongly dependent on import. On the other hand, the agricultural industry in the Netherlands and Belgium produces an enormous amount of phosphate-rich waste in the form of manure and other waste streams. In 2020, Dutch livestock emitted about 150 million kilograms of phosphate, Belgian livestock about 85 million kilograms.

This could and should be done differently, thought Marissa de Boer, ceo and founder of SusPhos. The company developed a technique to turn the linear phosphate chain into a closed chain. SusPhos takes phosphate-rich waste streams, such as sludge ash, dairy waste and potato waste, and extracts everything from them: sand, iron and especially phosphate, which it uses to make artificial fertiliser or flame retardants. In their own words, they create ‘smart chemistry for a better world’.

‘We contribute to a better world by using our chemical knowledge to recycle as much phosphate waste as possible’, says De Boer.’ Otherwise, the phosphate waste is lost and you have to dig up new phosphate from the mines. For every kilogram of phosphate mined, about three kilograms of waste are produced. That waste has no immediate purpose and can actually pollute the environment, for example if it ends up in surface water. That is a shame, because it is a valuable substance and it is harmful to aquatic life.’

The techniques used by SusPhos are, of course, patented and De Boer does not want to reveal too much about them. It is clear, however, that the separation technology is based on solubility. ‘We use different solvents to extract the various components of the waste one by one. If you extract specific substances, you get fewer purification steps and higher purity. In the end, we do not have any waste left over.’

De Boer started SusPhos after obtaining her PhD at the University of Amsterdam. There, she studied phosphate chemistry and how to valorise or upgrade phosphate waste. At the end of her PhD project, the first patent was ready and she founded the company. I figured, why not? I have always had entrepreneurial ambitions, there was a great opportunity that I believed in, and the only way was to do it myself.’

‘For SusPhos, suppliers are as important as the buyers, because it needs everyone to close the whole chain’

Use of residual heat

The pursuit of a better world is reflected in all aspects of the factory design. SusPhos has to be innovative, also because the competition is some seven year ahead. ‘However, we need much less energy because we make extensive use of residual heat’, De Boer explains. ‘We do not need to evaporate any water in our process and we do not create any waste. Using less energy is an advantage both in terms of price and sustainability.’ 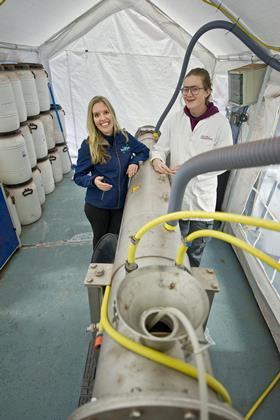 De Boer looked at several locations for the pilot and ended up at Paques Technology, a water technology company that had already built several pilot plants. With their support, SusPhos built the pilot plant, which is now operating in Leeuwarden - a very different city from Amsterdam. ‘I thought of Leeuwarden as a small and provincial town, but it is a really nice city. A bit like Haarlem.’

Leeuwarden is home to many companies with knowledge of water technology, according to De Boer. ‘We are here on the Water Campus with other water technology companies and the pilot plant is near the water treatment plant. This way, all parties are brought together. For SusPhos, the suppliers are as important as the buyers, because it needs all stakeholders to close the entire chain. This focus differs fundamentally from most companies, which are mainly concerned with output and the customer.’

‘We are left with no waste in our process, because we extract the different elements of the waste one by one’

The pilot plant, which is the size of three sea containers, has been in operation for a year now. Since there is a risk of explosion in the reactor under atmospheric conditions, the SusPhos team has been very concerned with safety from the very beginning. Most employees have a chemical or technological background and know how to guarantee process safety. A senior chemical technologist who can translate chemistry to a larger scale and who can design a plant will probably join the team soon.

This is necessary to prepare SusPhos for the next step. The company wants to have its first large-scale plant up and running by mid-2024. The plant should process 50 kilotonnes of phosphate waste per year and will serve as a proof-of-concept. ‘If it works, we want to scale up in Germany and Belgium - the sky is the limit.’