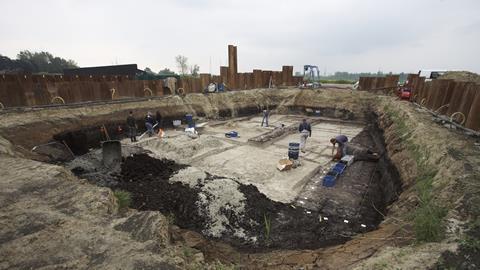 The rapid development of mass spectrometry, proteomics and machine learning is opening up entirely new possibilities for archaeological research. Minute remains of ancient potsherds turn out to be a source of information about daily life thousands of years ago. ‘We are impatient.’

In archaeology, you have to constantly find the balance between conservation and your own curiosity. You can examine rare finds with all the methods of analysis at your disposal, but the material will be lost and you know that in a few years’ time the available methods will be even more precise and sensitive. So when is the right time to analyse the remains? And how much of the sample will you destroy to find out what was in it? The instruments must be sensitive enough to work with very small quantities, so that enough of the original find remains for future generations.

In the last fifteen years, there has been a technological revolution in mass spectrometry (MS) and proteomics. MS became about a thousand times more sensitive and that is of great importance for archaeological analyses, as there is usually very little material available. This led to a new and fast-growing field in molecular science: palaeoproteomics, or protein sequencing, used to identify species and evolutionary relationships. Applying this technology to biological samples in archaeological finds such as food scraps on potsherds, you find information about our ancestors that was previously inaccessible.

Until recently, palaeobiologists mainly looked at DNA, but proteins have a number of advantages over DNA. For example, they are preserved longer and better: the secondary structure of proteins can survive for 40,000 years. Furthermore, DNA only provides the genetic information, but the phenotype (the characteristics that are expressed in the organism) cannot be determined with it. Proteins, on the other hand, contain all the information about the phenotype of a living organism. In addition, protein residues in pottery can tell us something about food use.

Maarten Dhaenens trained as a field biologist, but switched to molecular biology and has specialised in protein mass spectrometry for the past seventeen years. He is now team leader at the proteomics lab of the department of pharmaceutical biotechnology at Ghent University. His lab participates in a project of archaeologist Prof. Dr. Isabelle de Groote (UGent), which focuses on the migration, diet and health of the first permanent residents of modern-day Belgium. Dhaenens previously analysed the proteins in a paint flake of the famous Ghent painting The Lamb of God (dd. 1432) and found rabbit collagen in the paint. For De Groote’s research project, however, he has to look a lot further back in time.

The remains around which this new project revolves come from the Mesolithic period (12,000-13,000 years ago) and are very scarce. De Groote and her team want to reconstruct the past on the basis of these limited finds. Much is possible with palaeoproteomics, but it is a new field and sometimes the initial enthusiasm can be too great. Dhaenens: ‘Researchers sometimes hang an entire story on the discovery of a single peptide. But how do you interpret this discovery? How sure are you of your case? The protein residues in the samples are very minimal and in the past some people have drawnconclusions that were too big too quickly.’ 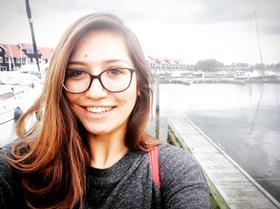 ‘Daily life is the most interesting. What did they eat? How did they prepare it?’

In their preliminary research, they successfully analysed residue on a potsherd from the Neolithic period (7000 years ago), provided by Professor Philippe Crombé, and found, among other things, milk, fish and bovine blood. The archaeologists were very surprised, especially about the milk peptides, because as far as we know, the people of that time did not yet keep animals. That means either a great discovery or an error in the analysis. Unfortunately, they could not reproduce their results, because the residue ran out after the first analyses.

Dhaenens: ‘The archaeologists put the brakes on. How sure are we of the annotation? Could the milk have got into the sample via the lab, for example, through spillage or because other analyses were done in the lab? Then you want to determine which organism the milk came from. Was it a cow or could a bacterium have a peptide that is similar to milk. Only when you have eliminated all those things can you say that the most plausible explanation is that 7000 years ago someone boiled milk in that pot or drank from it. We have to be very sure before we publish something like that. That is why I am happy that similar results have been found in the Netherlands for the same period.’

Dhaenens refers to the work of Özge Demirci, who analysed fat remains on Swifterband pottery (7000-5800 years old) from the Lower Rhine area during her PhD research at the University of Groningen and York University. From these fat remains, she tried to determine when the transition from hunter-gatherers to farmers took place, using GC-MS and GC-C-IRMS. She did her analyses in York, because there is no specialised lab in the Netherlands. She also found dairy products, but does not dare to say that people produced or drank milk. ‘We found fish residues in all samples, but dairy only once.’

Demirci has not yet done any protein analyses on pot remains, but would like to do so in the future. ‘It gives more information. Especially when I look at dairy products - which animal did that come from? Bone remains and DNA analysis don’t provide that much evidence.’ Demirci’s fascination with pottery grew during her PhD research. ‘I actually never wanted to specialise in pottery, because it seemed so boring. But new methods of analysis have made it an incredibly rich field. I have found oils that people actually used and now I feel a connection with those people. Daily life is the most interesting. What did they eat, how did they prepare it? The pottery remains contain the answer.’

Dhaenens and colleagues use a conventional bottom-up proteomics workflow. That means that she cuts all leftover proteins with the enzyme trypsin and analyses the resulting peptide mixture with MS. Specifically with Q-TOF instruments, quadrupole time of flight. Dhaenens: ‘That gives very high mass resolution: accurate to 10 ppm, a fraction of the weight of a protein. We can identify the peptides on the basis of the spectrum.’

As an analytical scientist, Dhaenens used to focus on histones that undergo epigenetic changes. Then came SARS-CoV-2 diagnosis, forensic proteomics and now palaeoproteomics. The latter appeals more to the imagination than histones, says Dhaenens. ‘If we find the skeletons of a woman and a child next to each other, we immediately start linking stories to them. Was that her son or daughter? That appeals to a broader public and for that reason alone we want to answer that question.’

With paleoproteomics it is reasonably easy to determine gender on teeth. Because of the hard matrix, the tooth, proteins are often well preserved in it. The amelogenin in tooth enamel is different in men and women because of the X and Y chromosomes. Dhaenens: ‘If we find type Y in the dental enamel, we know for sure that it was a man, if we don’t find Y it was probably a woman. We are now developing an assay with which we can calculate how sure we are if there is no Y.’ 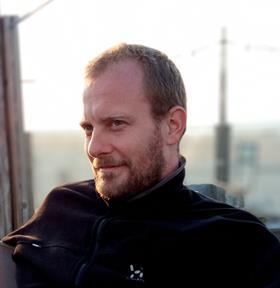 ‘We must always consider how much material we should sacrifice’.

These are questions they could not have answered ten years ago. Besides the revolution in mass spectrometry, new data analysis workflows have also been developed. With MS, researchers convert a biological sample into numbers, then you need bioinformatics to reconstruct what the sample consisted of. That field, too, has grown enormously in the past ten years, mainly due to the advent of machine learning. Dhaenens: ‘We work together with the group of Lennart Martens from Ghent (see also the interview, ed.). They can predict the spectrum of a peptide with a machine learning algorithm. If we only detect one peptide, they can compare the spectra and see how well the measurement matches the prediction. That gives extra confidence that we are looking at the right thing.’

According to Dhaenens, this underlines the importance of interdisciplinary work. De Groote’s project tries to find answers about the Mesolithic period in a cooperation of archaeologists, anthropologists and bioengineers, among others. The latter carry out isotope analysis, for example. The isotope profile of an individual is the result of what that person ate. As far as is known, there were no pots in the Mesolithic, so the researchers are trying to link peptides to behaviour and diet for a period for which they do have shards, such as the Neolithic. Then, based on isotope combinations in bones, they hope to say something about the situation longer ago.

The project has only just started and because remains from the Mesolithic are so scarce, Dhaenens will temporarily analyse medieval remains to optimise the protocols. These are much easier to find. They use skeletons from an excavation under the Sint-Baafs Cathedral in Ghent and try to extract as much protein as possible from the bones. The protocol that produces the most protein they will then apply to a Mesolithic sample. ‘Then we have to be very careful and use as little material as possible. More will be possible in the future, so we want to preserve as many samples as possible, but we also want to do research now, because we are impatient. Archaeologists and analytical chemists must always consider how much material we are sacrificing.’

Dhaenens hopes to find more information about the diet on Neolithic potsherds, such as proteins, sunflower seeds, blood from cattle or fish and, of course, milk. ‘Other research around the world has found similar remains on even older potsherds, so these diets did exist. These are intuitive and clear results: those proteins are in those jars because people used them for that food.’

Something they cannot yet do with protein analysis, but would like to do, is determine the age at death from human remains. Archaeologists can tell a lot from the morphology of those remains, but if you only find very small fragments, protein analysis may be able to help in the future. There are so-called age biomarkers that only occur in people up to the age of fourteen. For adults that is more difficult, but maybe there are proteins that are only expressed later in life.

What Dhaenens likes best is how people 7000 years ago left their molecular mark that we can still see today. ‘Those molecules have travelled through time and now they are with us. You can’t sketch them more directly. They have left a mark over millennia that they were completely unaware of. I now realise all the more that in a few thousand years’ time they may also be able to see something of me.’