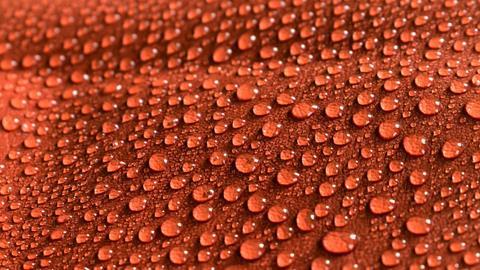 A team of researchers from TU Eindhoven developed an artificial skin that sweats on command.

Two years ago, Danqing Liu’s team demonstrated an artificial skin that could dispense liquid evenly. Now, the team has further developed this concept into an artificial skin for which they can control where the skin secretes fluid with an accuracy of a few micrometers. In addition, they can use external stimuli to determine how long the skin gives off liquid, where the liquid collects and when the skin absorbs the liquid again. They published their findings in Angewandte Chemie.

The artificial skin is made of nanoporous liquid crystalline (LCNs) polymers. The researchers control the liquid by means of UV light and an electric field. The UV light initiates fluid separation in one direction. Next, they apply an electric field, with which they move the liquid to the desired locations. If they use both triggers at the same time, the researchers see a so-called UV-gated fluid release.

A sweating artificial skin can be used, for example, to cool the surface of robots. As the technology gets closer to real skin, applications in human-realistic robots may become possible. It could also find application in special bandages that deliver drugs in a controlled way.