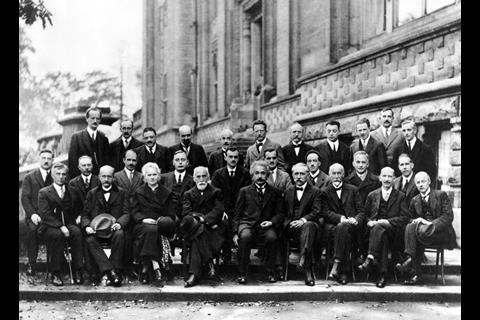 A group of European scientists have made a reprise of the iconic Solvay photo taken in 1927.

In 1912, the first Solvay Conference took place in Brussels, at the initiative of Belgian industrialist Ernest Solvay. The fifth edition, in 1927, became world famous because of the photograph that was taken of the participants. The photograph has also been called ‘the most intelligent photograph ever taken’. We see a group of 28 distinguished-looking gentlemen and a woman, also distinguished-looking. The absolute scientific elite of their time in physics and chemistry. Curie, Lorentz, Einstein, Bohr, Schrödinger, Planck, Pauli, Heisenberg, Dirac and many more famous names.

And now a reprise of that picture has been made. Not at a Solvay conference (which will take place in October), but in Brussels at the celebration of the 50th anniversary of CEFIC, the European organisation of the chemical industry. The new photo shows a larger and more varied group of professors and PhD students. The Belgian and Dutch chemical community are both well represented. It may take a while to find them, but in the back row are Roeland Nolte (RU), Bert Meijer (TUE), Daan Frenkel (AMOLF), Bert Weckhuysen (UU) and Steven De Feyter (KU Leuven). In the middle row: Thomas Hansen (VU Amsterdam), Kevin Van Geem (UGent), Roy Aerts (UAntwerpen). And sitting in the front row: Ben Feringa (RUG) and Annemie Bogaerts (UAntwerpen). Now we just have to wait whether this picture will be as famous as the one from 1927.