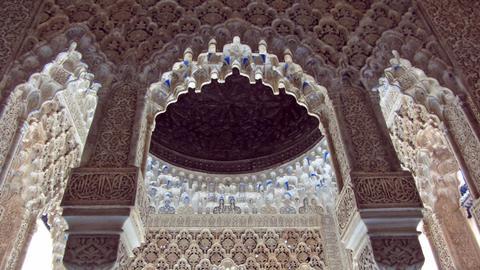 Gold is known as an inert material, yet gold alloys can certainly degrade. Researchers from the University of Grenada analysed gilded tin on the ceilings of the Alhambra palace, which turns a purplish colour in some places. They show that the plaster corrodes electrochemically, creating nanoparticles about 70 nm in size from the gold in the gilding. And that seems to be the optimal size to give a purple colour, they write in Science Advances.

Purple rash of gold on damaged artworks is a well-known phenomenon, but a full explanation was still lacking. Using microscopic and chemical analysis, the Grenada-based team shows that this phenomenon results from a series of processes: coexisting galvanic corrosion, differential air corrosion and dealloying (the selective corroding of a metal from an alloy). The damage was made worse by the presence of chlorine in the air. In addition, the purple rash became better visible due to a white plaster coating applied in the 19th century.

Although the research looked specifically at samples of the Alhambra gold leaf, the results may also contribute to the conservation of other historical works of art. The researchers hope their work will help other experts prevent corrosion of gilded objects.