Australian researchers have discovered that copper atoms in pyramid-like structures selectively convert CO and CO2 into ethylene glycol (C2H6O2). The research was published this month in Chemical Science. 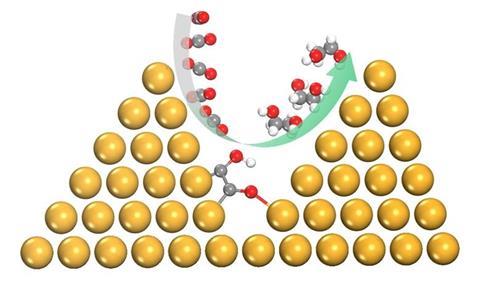 CO2 can be converted electrochemically into products with one or more carbon atoms, such as hydrocarbons. Producing alcohols is more difficult than producing hydrocarbons and the selective production of high-quality C2 chemicals such as ethylene glycol has not yet been successful. Ethylene glycol is an important industrial building block with high mass energy density. Current technology to produce it on a large scale is energy- and cost-inefficient.

Ling Chen, Shi-Zhang Qiao and colleagues from the University of Adelaide previously showed computationally that a copper catalyst transformed into a pyramid would increase electrocatalytic activity and selectivity towards C2 products. They attributed this effect to improved adsorption, preferential sites for C-C coupling and improved electron transfer. Using density functional theory (DFT) calculations, the team has now shown that the environment created between densely packed copper nanopyramids enables the selective conversion of CO2 and CO to ethylene glycol.

This pathway is not favourable on a flat copper surface or on less densely packed nanopyramids. Densely packed copper nanopyramids allow the formation of an additional O-Cu bond between adsorbed COH-CO and copper on an adjacent pyramid. This not only promotes C-C bonding, but also protects the oxygen atoms from dehydroxylation. The additional bond also promotes hydrogenation to ethylene glycol by lowering the formation barrier for the important intermediate COH-CHO and kinetically suppresses the usual dominant pathways.