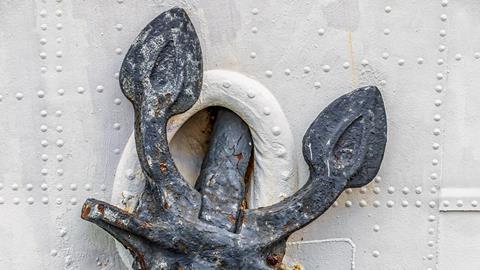 Polyethylene glycol (PEG) coatings can be functionalized without prior chemical modification, according to Daniela Wilson and colleagues from the Radboud University Nijmegen in Nature Chemistry.

In biomedical applications, polyethylene glycol (PEG) coatings are often used, for example as an anti-bacterial layer on medical implants or as a ‘camouflage’ for drugs. After all, PEG is considered chemically inert and, normally, nothing sticks to it.

The idea of Daniela Wilson, professor of systems chemistry at Radboud University Nijmegen, consists of providing functional groups with an ‘anchor’ that can position itself between the PEG-chains and subsequently can stay there due to vanderwaals forces. In an accompanying community blog on their Nature Chemistry publication, Wilson and first author Shaohua Zhang explain that in doing so they are actually mimicking the non-covalent mechanism that cell membranes use to bind surface proteins.

PEG is hydrophilic and normally, the coating gets filled up with water molecules that stick to each other via hydrogen bonds. Intuitively, you wouldn’t expect another molecule to easily get in between, especially if it is hydrophobic. But computer simulations showed that sheets of graphene, thanks to entropy effects, should indeed be able to nestle themselves in this layer of water. 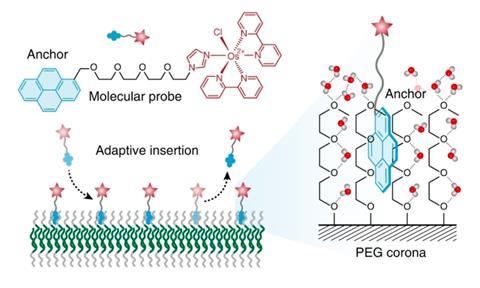 Wilson and Zhang decided to try this experimentally using assemblies of aromatic rings that chemically resemble ‘graphene fragments’. Their compound contains a pyrenyl group connected to an osmium complex as an example of a functional group, with a short piece of PEG as a chemical ‘anchor chain’. The coating was arranged like a ‛corona’ around the polystyrene beads. And the aromatic anchors appeared to be sucked into the coating entirely as planned.

The exact structure of the ‘graphene’ fragment matters quite a bit. However, the functional groups are easily displaced by others that have a better-fitting anchor. The researchers have also already shown that you can remove these groups completely by adding another polymer to which the anchors more strongly adhere, and then direct them back into the PEG coating by neutralising the other polymer with inorganic salts.