Brain in a dish plays Pong

A group of scientists from Melbourne shows how brain cells living in a petri dish can play the arcade game Pong. 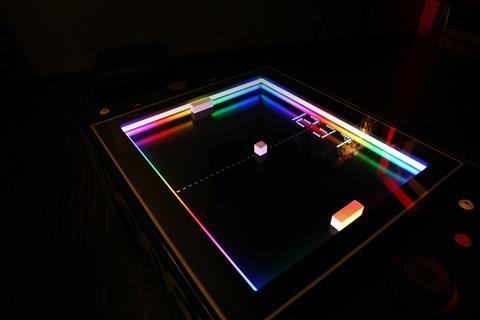 Australian researchers are the first in the world to teach cultured neurons to perform a task. DishBrain, as they call their network, consists of 800,000 brain cells in a petri dish and can play the video game Pong. They found a way to interact with the cells and stimulated them to modify their activity. This creates a form of so-called synthetic biological intelligence. They published their results in Neuron.

The research team took cells from embryonic mouse brains and human brain cells derived from stem cells. They grew these cells on top of microelectrode arrays that could stimulate and read their activity. Electrodes on the left and right side on an array told DishBrain on which side the ball was, while the distance from the paddle was told by the frequency of signals. Feedback from the electrodes taught DishBrain how to return the ball, by making the cells act as if they were the paddle themselves.

One big challenge was how to tell the cells what to do. They could not use dopamine feedback like one would do in training test animals. Instead they used information entropy, which tells how the system might self-organize to interact with its environment. According to the free energy principle, the cells will try to minimize the unpredictability of their environment. Thus, the researchers gave a random feedback pulse when the paddle missed the ball and a consistent pulse when it hit.

The researchers found apparent learning within five minutes of real-time gameplay. They think their invention offers a simple approach to test how the brain works and to gain insight in conditions such as epilepsy and dementia. Next, they would like to see how medicines and alcohol affect DishBrain’s performance.