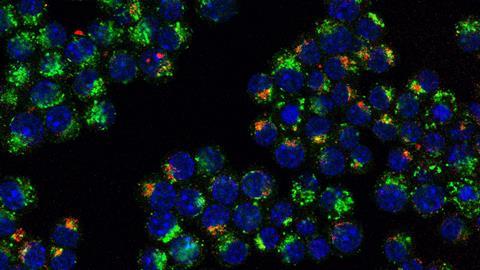 Macrophages are the ‘trashmen’ of our immune system. They mercilessly break down anything foreign or threatening. Unfortunately, tumours are capable of using macrophages to their own benefit. This is bad news, because these so-called tumour-associated macrophages then form a strong line of defence against the body’s own immune cells and protect the tumour from chemotherapeutics.

Tumour-associated macrophages (TAMs) show increased expression of the chemokine receptor CCR2 and increased activity of the enzyme cathepsin. To gain insight into the TAM population in a tumour, the research groups of Martijn Verdoes (RadboudUMC) and Marc Vendrell (University of Edinburgh) developed chemokine conjugates to specifically direct cathepsin-activatable molecules to CCR2 to be activated there. This provides very specific chemical ‘probes’ that, when coupled with a fluorescent label, allow you to visualise exactly if and where these TAMs are present. This method thus makes it possible to distinguish the bad guys from the desirable macrophages. Floris van Dalen, PhD student at Verdoes, made this image of mouse macrophages acting as a model for TAMs. In blue, we see the cell nucleus. The probe that is internalised via CCR2 and then activated by cathepsin is red and in green we see the ‘late’ endosomes (vesicles in which incorporated material is degraded). The probe is activated in both the early (without green) and late endosomes. The picture is part of a recent hot paper in Angewandte Chemie. 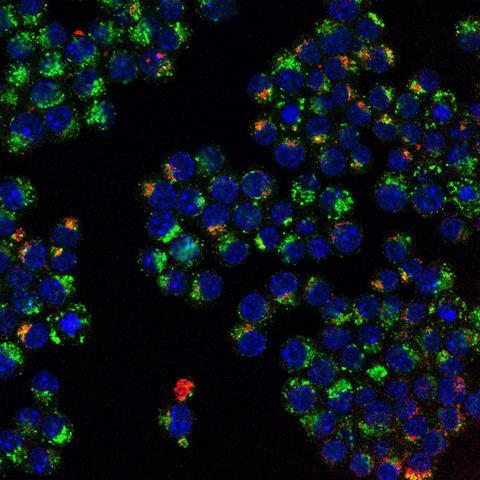