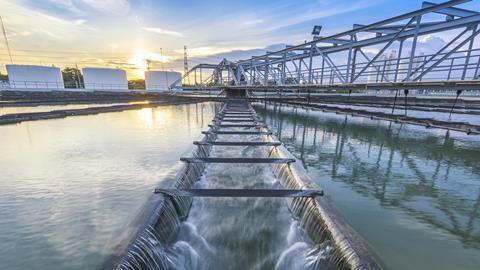 The PFOS scandal in Flanders reaches as far as the Netherlands, as Zeelanders are now being advised not to eat fish from the river Westerschelde. Research is in full swing, and so concerns are growing about the exposure of humans and animals to these persistent fluorine compounds.

The Netherlands has now forgotten about halting all dredging and soil movement due to PFAS in 2019. In Flanders, on the other hand, the discussion about this fluorine-containing pollution is raging in all its intensity, in what some are calling the PFOS scandal. The reason is the construction of a ring road and tunnels to the north of Antwerp. This Oosterweel connection will be near the Antwerp municipality of Zwijndrecht. Substantial quantities of perfluorooctane sulphonic acid (PFOS) were found during soil investigations in 2017.

The extent of the environmental pollution only came to public attention in 2021, when high concentrations of PFOS were found during excavation work in the area. At that time, it also became known that the Flemish government knew about the pollution but did not disclose it. In any case, during the summer of 2021 major concerns arose about the risks of moving contaminated soil, and the PFOS exposure of inhabitants of Zwijndrecht. The fact that PFOS was found in this area comes as no surprise: the 3M factory produced perfluorooctane sulfonic acid there for several decades, until the substance was banned by international environmental treaties.

In June 2021, political fuss and lawsuits surrounding the Oosterweel connection led to the Flemish government appointing a so-called PFAS commissioner. Chemist Karl Vrancken (University of Antwerp) was given the task of coordinating large-scale research into PFAS in soil, water, food, plants, humans and animals. Vrancken has now published two interim reports, the most recent in March 2022. These include reports on PFAS measurements in the blood of 796 inhabitants of Zwijndrecht within a 3 km radius of the 3M site.

The results are not reassuring: residents have especially high PFOS and PFHxS values in their bodies, two compounds that were once produced by 3M. ‘In the vast majority (92.7%) of the participants, the sum of PFOA, PFNA, PFOS and PFHxS was above the EFSA guideline value of 6.9 nanograms per litre’, write the researchers. The results show that the exposure to PFOS in the population in the vicinity of 3M is too high from a medical point of view and that urgent action is needed to reduce exposure. Epidemiological studies in particular have shown that exposure to high concentrations of PFAS poses risks of increased blood cholesterol, liver damage and reduced birth weight.

The most important exposure routes in Zwijndrecht have not yet been fully mapped. Drinking water and food are logical candidates. In any case, the Flemish government has already advised not to eat eggs from chickens from your own garden within a radius of 10 km around the 3M factory. Since a few weeks, the same advice is in force for consuming self-caught fish in the Dutch part of the Westerschelde.

With this, concerns about PFAS have spread to Zeeuws-Vlaanderen. Research on flounder shows a strongly increased concentration of PFOS, much higher than plaice and sole from the North Sea. Recently, the RIVM did a first risk analysis, which shows that an adult is already at the annual PFAS limit after consumption of one or two portions of home-caught fish.

We have actually known for years that Flemish PFAS reaches the Netherlands. Rijkswaterstaat monitors PFAS in fish and water at several locations in the Netherlands, and flatfish in the Westerschelde already stood out in 2018. What’s more: three years earlier, research by Wageningen University & Research had already shown a very high concentration of PFOS in seals, which may play a role in the reduced fertility of these animals in the Delta area. PFOS is, in fact, one of the PFAS species that accumulate most strongly in the food chain, and seals are fish-eaters par excellence.

Attention to problems in Flanders and the River Scheldt sometimes gives the impression that PFAS contamination occurs mainly around production sites, but that is an illusion. For example, spread across Flanders, PFAS is monitored in fish, water and sediment at forty locations. The PFAS levels are high, but so are mercury, PCBs and dioxins. For years, it has therefore been advised against eating eel that you have caught yourself. The situation is not much better in the Netherlands: here too, the PFAS consumption standard is exceeded in freshwater fish in many places, even far from production sites such as Chemours in Dordrecht. Fluorine pollution knows no boundaries: every year, the Netherlands receives around 2500 kg PFAS via the major rivers alone.