Live visualisation of battle between cell and virus

With the new imaging technique VIRIM, you can follow the course of a virus infection in greater detail than ever before. A virus has even more tricks up its sleeve than expected. 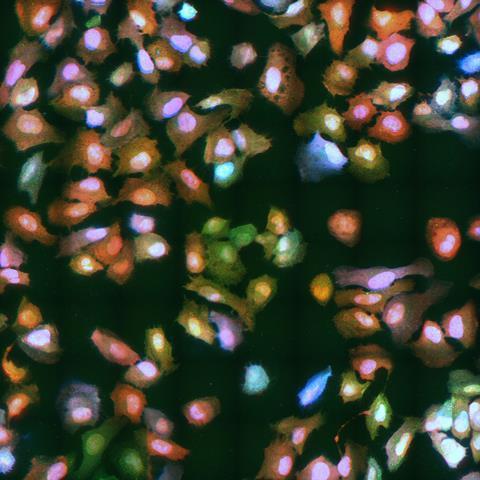 Live image of infected cells. After a virus infects a host cell, it tries to replicate (green) and prevent the host cell from interfering with virus replication by attacking the cell nucleus (blue) and stopping the host cell’s protein production (red).

A small green dot under a microscope. When cell biologist Sanne Boersma spotted that point of light for the first time, she knew her experiment had succeeded. In other words: imaging technique SunTag - developed a few years earlier at the Hubrecht Institute in Utrecht, where Boersma works as a PhD student - can be used in viruses. The method brings ready-made fluorescent proteins to the scene of a virus infection: the translating and replicating viral RNA.

It means you can follow the first steps of a virus infection molecule by molecule, live and in living cells. It is the first time that researchers have been able to visualise this process in such detail. Boersma and colleagues called the application of SunTag VIRIM (virus infection real-time imaging) and published the accompanying paper in Cell.

VIRIM is particularly interesting for positive RNA viruses. ‘The RNA molecule of such a virus is used to produce proteins immediately after it enters the cell, so you see the first dot appear immediately’, says Boersma. Pathogenic RNA viruses include the hepatitis C virus, the West Nile virus and the Zika virus. Coronaviruses also belong in this list. Boersma: ‘We have a treasure trove of virus knowledge at our disposal because we work closely with the research group of molecular virologist Frank van Kuppeveld, professor at Utrecht University.’

‘We now know what the Achilles’ heel of this virus is’

‘As soon as a virus particle enters a host cell, a fight ensues’, says Huib Rabouw, second author of the paper. He started this project as a PhD student with Van Kuppeveld and is now a postdoc at the Hubrecht Institute in Marvin Tanenbaum’s lab just like Boersma. ‘The virus then wants to multiply as quickly as possible, but the cell tries to prevent this from happening.’

VIRIM visualises the fight step by step. Rabouw: ‘Roughly speaking, we do two things. Firstly, we ensure that the host cell continuously makes a specific antibody that is labelled with a green fluorescent protein, GFP. Those antibody-GFP molecules ‘swim’ through the cytoplasm of the cell. Secondly, the genetic material of the virus contains a code that expresses SunTag peptides during translation. The antibodies with GFP recognise and bind to these peptides.’

VIRIM brings a handful of ready-made fluorescent molecules to the crime scene during the translation of the virus. The individual GFPs in the cytoplasm are not bright enough to see under the microscope, but such a clump of fluorescent proteins is. ‘Because we are not looking at the production of GFPs, but at the accumulation of already existing GFPs, this assay is much more sensitive than other analyses,’ says Rabouw.

‘It takes a while for GFP to become fluorescent. If the hereditary material of the virus has to produce the protein itself, the translation process would already have been completed when the GFP finally lights up. It is then no longer attached to the RNA but floats around somewhere in the cytoplasm. In addition, many existing techniques require several cells to be lumped together to even observe a signal at all. You then lose all the subtle kinetics in the averaging process, while we are able to measure those with VIRIM.’

The method is most likely applicable to all positive RNA viruses, but you do have to optimise it each time. Rabouw: ‘Viruses don’t like having extra genetic material rammed down their throats. If it doesn’t like the extra RNA code, the virus will recombine it out of its system in no time.’ But the less genetic material you add, the fewer SunTag peptides the virus makes and the fewer fluorescent proteins it can bind to the crime scene. That makes analysis difficult. ‘We have to find the ideal balance for each virus between a strong enough signal and an acceptable genome for the virus.’

For this study, Boersma used Coxsackievirus B3, a relatively harmless RNA virus from the picornavirus family that in most cases causes a mild cold. Via a livestream of microscopy images, she saw how the virus took control of the host cell. ‘We could distinguish different phases of the infection,’ says Boersma.

The first green dot initiates phase 1, during which the invaded viral RNA makes proteins through translation. During phase 2 the dot disappears for a moment; the translation stops and the replication, or copying, of the viral RNA starts. Then the newly synthesised RNAs start to translate and replicate - phases 3, 4 and 5 - good for dozens of green dots on the livestream.

The virus has now successfully introduced its genetic material into the host cell and taken the cell’s machinery hostage. The cell is forced to use its factory to produce new virus particles. ‘If that happens, the infection is successful. The virus wins, the cell is lost’, says Boersma. Fortunately, the immune system still has a few other tricks up its sleeve to fight the virus, but the infected cell will die.

VIRIM reveals how much guts viruses actually have, more than previously thought. Boersma: ‘We found out that a virus particle attempts to disrupt the cell’s protein production on its own only a few minutes after it enters the host cell. The virus remains under the radar of the cell all that time, because the cell only starts a counterattack when the enemy begins replicating for the first time during phase 2. This means that the host cell’s armoury - no matter how strong - has no influence on the translation of the first RNA molecule (phase 1, ed.).’

‘So the virus has some time to make proteins, including proteins that counteract the antiviral response’, Rabouw adds. ‘It does that with just one RNA molecule. Apparently, the virus is so efficient that, with a few dozen proteins, it can destroy the cell’s entire armoury before it even has a chance to react to the intruder.’

Before the arrival of VIRIM, the crucial first steps of the infection were a black box. ‘Thanks to the assay, we know that phase 2 is the virus’ Achilles’ heel, because at that moment it can no longer hide from the host cell’, says Boersma. Rabouw: ‘That first replication step is the most vulnerable moment, so it is ideal for targeting antiviral therapies.’

To try this out, the researchers released several inhibitors on the process, which prevented new RNA molecules from being made. ‘We then saw something unexpected’, says Boersma. ‘The light sometimes went back on. In other words: the RNA molecule became active again after being switched off. Apparently, the virus has some kind of back-up in reserve if it fails replicating immediately. The little genius just tries again a little later.’

Image caption: Live image of infected cells. After a virus infects a host cell, it tries to replicate (green) and prevent the host cell from interfering with virus replication by attacking the cell nucleus (blue) and stopping the host cell’s protein production (red).