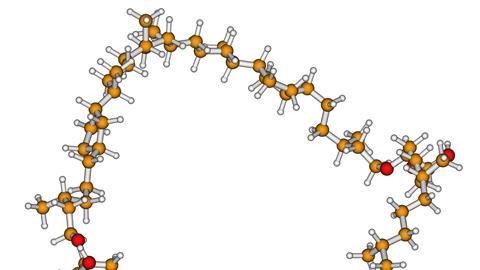 Crenarchaeol, a molecule of superlatives

Crenarchaeol is considered an ‘iconic molecule’ in organic geochemistry. Although a challenge of stature, it did not let organic chemist Adri Minnaard go and this year his PhD student Mira Holzheimer almost managed to synthesise it.

‘Do not fall into the trap of usefulness’, Adri Minnaard, an organic chemist and director of the Stratingh Institute for Chemistry at the University of Groningen, told me. ‘Presumably, crenarchaeol makes the membrane less permeable, which is only important for life under more extreme conditions. The molecule will not become a medicine, not a material, and if you want to use crenarchaeol, it is ultimately better to isolate it from sediment than to make it chemically. The main question of our research was whether molecules of this complexity could be made by chemists.’

Because it is indeed complex: crenarchaeol consists of a ring of 66 atoms, 22 chiral centres, 4 five-membered rings and a six-membered ring. If such a molecule would occur in nature, then surely in minuscule quantities and in an exotic organism? ‘Wrong’, Minnaard says. ‘We see the molecule in archaea of the genus thaumarchaeota: single-celled organisms that you find in every litre of seawater. And given the amount of seawater on earth, plus the gigantic amount of sediment in which this molecule is preserved, this means that the molecule must be one of the most common complex organic substances on earth.’ 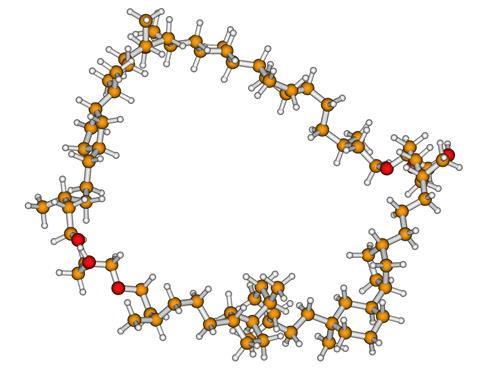 Above the original crenarchaeol, below Mira Holzheimer’s variant, with the reversed stereochemistry of the chiral quaternary carbon atom (light green circle). 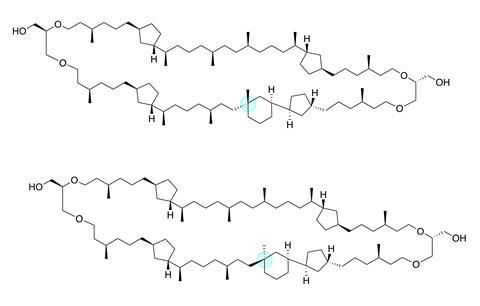 The structure of crenarchaeol was first described in 2002 by Jaap Sinninghe Damsté and colleagues at NIOZ (Netherlands Institute for Sea Research). Although crenarchaeol is ubiquitous, its concentration in sediment and seawater is extremely low and an intensive isolation campaign was necessary to obtain sufficient material for useful NMR spectra. Minnaard: ‘The structural clarification of crenarchaeol was an enormous puzzle because of those rings. But also because it turned out to contain a carbon atom surrounded by four different carbon substituents (a chiral quaternary carbon atom, ed.). That is highly unusual in these compounds.’ Once published, crenarchaeol became an iconic molecule in organic geochemistry.

Minnaard became acquainted with crenarchaeol when he met Jaap Sinninghe Damsté during the presentation of his Spinoza Prize (sometimes called the Dutch Nobel prize) in 2004. As a synthetic organic chemist with a nick for natural substances, I am afflicted with the Bob the Builder reflex: can we build it?’ Crenarchaeol, however, seemed to Minnaard to be a step too far, not in the least because none of the world’s major synthetic organic chemistry groups seemed to be making any effort to crack this nut.

But crenarchaeol never completely disappeared from Minnaard’s view. Some of its structural elements also occur in substances from tuberculosis bacteria – ‘an unfathomable fact, by the way’ – and these are an important subject in his research group. ‘Jeffrey Buter was a PhD student in my group at the time and decided, for the purpose of an NMR study, to re-isolate crenarchaeol together with the people from the NIOZ and to repeat the structure elucidation using the NMR techniques, which had been greatly improved. This also turned out to be a golden move for another reason: Buter supervised student Mira Holzheimer during her graduation project and when she saw the molecule on the computer screen she exclaimed, according to Minnaard: ‘This one I want to make!’

Holzheimer started working on the synthesis of crenarchaeol as a PhD student in 2016 by cutting the molecule into pieces in her mind and then doing a retrosynthetic analysis. By making use of the somewhat hidden symmetry in the molecule, she was able to reduce the number of building blocks required, but nevertheless a huge number of reaction steps remained. In the actual synthesis, each of the 22 stereocentres had to be made correctly, as the analysis of Sinninghe Damsté’s prescribed, and conclusive proof had to be provided. Minnaard: ‘This even required checking the commercial starting materials used. Anyone can make a mistake, right?’ Holzheimer also had to develop a new reaction for the fragment with the ‘quaternary carbon atom’ as this was not possible with the existing reaction repertoire.

After more than three years of hard work, most of the crenarchaeol was made, including the fragment containing the quaternary carbon atom. Holzheimer had already exceeded fifty synthesis steps and by now referred to crenarchaeol as ‘the porcupine’. At that point, sometime in 2019, doubts arose as to whether we would be able to determine whether the structure, and in particular the stereochemistry, was completely correct by comparing synthetic and natural crenarchaeol’, Minnaard says. Colleagues at the NIOZ therefore broke off a very small quantity of the natural isolate in a controlled way and compared it with the synthetic half-product by means of gas chromatography and mass spectrometry. That turned out to be a tragedy: the fragments were not identical.’

After days of re-analysing all the synthesis steps, it turned out that the stereochemistry of the chiral quaternary carbon atom in natural crenarchaeol was precisely the other way around. The structure as originally proposed was therefore exactly backwards in one of the 22 centres. Minnaard: ‘Re-synthesising, now with the other stereochemistry on that carbon, would yield natural crenarchaeol but would also take at least a year. We did not have that year. We decided to complete the synthesis of our version to prove unequivocally that natural crenarchaeol looked slightly different from what was assumed.’

The synthesis ultimately took more than 65 steps and ring-closing reactions on less than a milligram scale. Thanks to the NMR expertise of Pieter van der Meulen and Johan Kemmink, Holzheimer and Minnaard were still able to record usable spectra in March 2021. ‘As icing on the cake, Remco Havenith from our institute managed to calculate remarkably congruent NMR spectra, even for this extremely complex and flexible molecule’, says Minnaard. ‘This underlined that everything in the structure of crenarchaeol was correctly determined, except for the stereochemistry of that one carbon atom.’

It is the conclusion of a heroic story about a quest that started in 2004 when Jaap Sinninghe Damsté was awarded the Spinoza prize. A search that, despite that one mistake, was in fact successful, based on the formulated goal to see if anyone could synthesise such a complex molecule. Mira is now working in Alois Fürstner’s group at the Max Planck Institute in Mülheim on her next molecule’, concludes Minnaard. ‘And I am going to listen carefully to our new Spinoza laureate Marc Koper. Although, that could cost me a lot of time.’