About peanuts and a double helix

The man in the monkeynut coat is a witty biography about a renowned scientist with a forgotten role in the history of DNA. 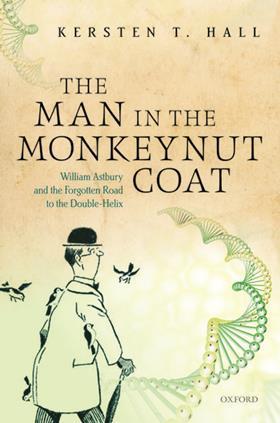 The most famous ‘forgotten scientist’ linked to the discovery of the double helix in 1953 is, of course, Rosalind Franklin. She gained her own book in 2002 with The dark lady of DNA and thus the recognition she deserved. But apparently we have overlooked another scientist. Author Kersten T. Hall corrects this omission in The man in the monkeynut coat. He did so in 2014, by the way, but the just-released version has some additions on the covid pandemic.

The central fact of the book is that Franklin’s 1952 X-ray diffraction photograph of DNA was not the first. ‘Photo 51,’ perhaps the most famous photo in the history of science, dates from a year later than a similar photo taken from the lab of the colourful physicist and World War I veteran William Astbury. Astbury could not interpret that photograph, as James Watson did see the implications immediately when he sneaked a peek at Franklin’s Photo 51, and it cost him a Nobel Prize, the author argues.

That wasn’t entirely his fault. Astbury did recognize the importance of DNA and wanted to set up a department of ‘molecular biology’ - a new term at the time - at the University of Leeds, but encountered a lot of resistance from biologists who did not want the physicist Astbury in their line of work. Moreover, the textile industry, his source of funding, preferred him to focus on keratin, the main component of wool. Astbury would never look at DNA again after the 1951 photo in question. He permanently shifted his attention to other macromolecules and would go on to make important contributions to the discovery of α-helices and β-sheets.

And his coat of peanuts? That was a marketing stunt with a surprisingly topical theme. Astbury used X-ray diffraction to discover the structure of the peanut protein arachin and was able to process it into textile fibers. A pilot plant produced a coat from this material, which Astbury enthusiastically wore to lectures in the 1940s. Not only to promote the material, but also as an example of the importance of investing in academic research. In a letter to Nature in 1944, he wrote, far ahead of his time: “Fundamental academic research is essential to industry, yet it is deeply regrettable that such basic research should forever be having to demonstrate its practical worth.”