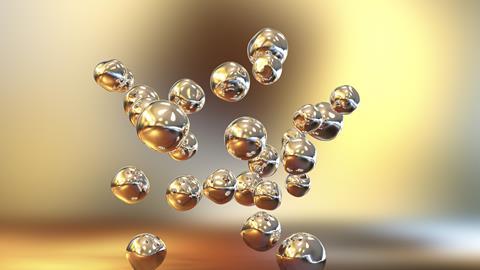 With plasmonic nanoparticles and somewhat concentrated sunlight, you can convert CO2 to CO much more efficiently without having to use high temperatures, reports ChemCatChem.

The call to reduce the amount of CO2 in the air is heard worldwide. To do that, you could convert CO2 into fuels or other useful molecules, closing the carbon cycle. The trick is to do that efficiently, because CO2 is a fairly inert molecule and needs a lot of energy before it reacts with other molecules. Pau Martínez Molina, Francesc Sastre and colleagues from TNO in the Netherlands, Zuyd University of Applied Sciences and the Flemish Hasselt University, among others, found a short cut.

The researchers combined a number of recent discoveries and optimally put them together. They started with a catalyst of plasmonic gold nanoparticles on a support of TiO2 in the anatase form (a slightly less stable alternative crystal structure). This catalyst selectively converts CO2 and H2 into CO and water.

This process usually requires a high temperature of over 800°C, but the new process has a reactor temperature of less than 30°C and still has a selectivity of 98%. The trick lies in the ‘plasmonic’ part. Plasmonic nanoparticles can absorb a much greater range of electromagnetic radiation compared to the pure metal. The researchers used a sunlight simulator with a concentrator that increased the intensity of sunlight to 14.4 times that of the sun.

The incoming concentrated sunlight heats the catalyst base to about 135°C, partly because the nanoparticles act as nano-heaters. The places on the catalyst where the reaction takes place thus receive the necessary heat energy. The light also prevents the formation of methane, which is more likely to form at lower temperatures than CO.

With an efficiency of 98%, a relatively high quantum efficiency of 4.7% and a CO production rate of 429 mmol/h per gram of gold, this process seems to be a nice stepping stone towards industrial application with which you should be able to synthesise longer hydrocarbons. 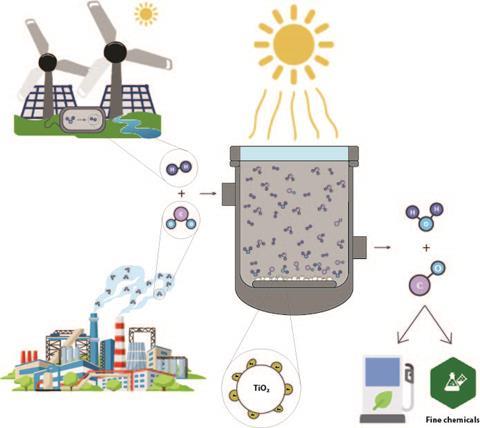