Chemical formulas on a more than 2,000-year-old Chinese text have become a lot clearer. The six formulas for bronze turn out to be pre-made alloys rather than pure metals, says Antiquity. 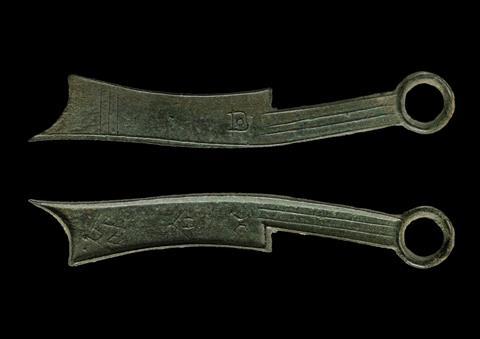 Beeld: The Trustees of the British Museum / CC-BY-SA 4.0

The researchers studied these Chinese knife coins, among other things, that were in use around 400 BC.

For a long time, there was some confusion among researchers about two components in the chemical formulas for bronze from the Rites of Zhou text from the late Eastern Zhou Dynasty (770-221 BC). They are Jin (金) and Xi (锡). It was thought that Jin stood for copper, a copper alloy or simply metal, and Xi for tin, but exactly what they mean remained unclear. Mark Pollard (Oxford University) and Ruiliang Liu (British Museum) express their suspicion that Jin and Xi are alloys, which formed the basis for the bronze.

The text is in the section that is loosely translated as Book of Various Crafts. It is an administrative text – not a scientific one – describing bureaucratic positions and other administration. Chapter 5 (Metalworkers) lists the metalworkers and blacksmiths, after which the six formulas follow. Another researcher (Von Falkenhausen) wrote earlier that this may be a reason that the text seems to be somewhat vague and not very accurate on the technical aspects. So, whether the compositions of Jin and Xi correspond to the analysed archaeological materials is not necessarily the main issue of the text.

For their own research, Liu and Pollard looked at the composition of coins and objects from the time of the text. The databases also show the presence of lead in the chemical composition of the bronze objects; they are therefore not pure tin-copper alloys. From this, one can conclude that either Xi is not pure tin, Jin is not pure copper, or both. They suspect that Jin is a bronze alloy of 80% copper, 15% tin and 5% lead, and that Xi is a 50/50 copper-lead alloy. Compared to the data, that composition seems reasonably plausible, although they are honest enough to say that these are not the exact compositions, but rather possible ratios.

What they do dare to say with more certainty is that the making of the bronze alloys was done with pre-prepared copper alloys. According to Von Falkenhausen, the fact that the archaeological data do not match the formulas very well is a result of ‘administrative fiction’.