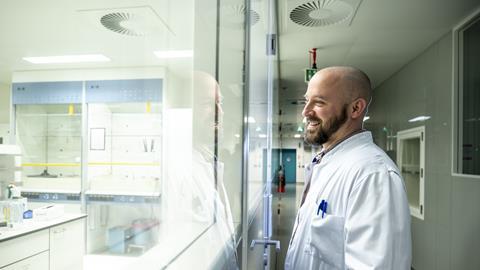 Radiochemist Erik de Blois did not shy away from the great technical challenges of working with an α-emitter in a clinical environment under GMP conditions, resulting in the first phase 1 study with a radioactive medicine. ‘I have a practical mind.’

One thing is clear after talking to Dr Erik de Blois, clinical radiochemist and head of quality control at Erasmus MC: his team had to invent just about everything themselves to develop their new medicine for prostate cancer, based on a radioactive actinium isotope. ‘We practically started from scratch’, he says.

De Blois outlines the challenges he and his team faced. From the availability and purification of actinium and its coupling to a biologically active molecule, to the strict legislation for working with α-emitters and the thin-layer chromatography and HPLC techniques he had to develop to be able to say something about yield and purity. And for a phase 1 study, it all had to be done under GMP conditions. ‘I had wanted to do this for a long time but had no idea where to start, there were so many technical challenges’, he says with a laugh.

‘Very little is known about Ac-225 in a pharmacological setting. This is really pioneering.’ 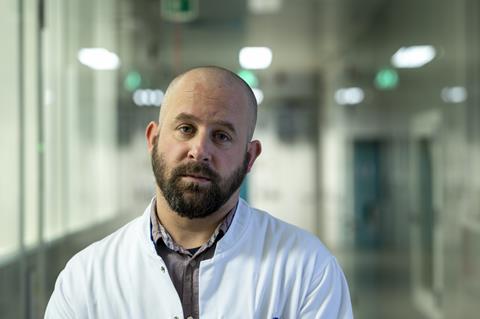 How do you get Ac-225, for example? That is a story in itself. ‘Actinium only occurs as a radioactive isotope and is super-toxic’, says De Blois. ‘It is still hardly used anywhere, there are barely any suppliers and there are no GMP protocols for production.’

The most common sources appear to be nuclear waste and discarded nuclear weapons, from which you extract the precursor thorium-229. This is radioactive with a half-life of 7,430 years. You bind it to a column, elute it, and then radium-225 is released, which decays to Ac-225. De Blois calls this set-up a dairy cow for the production of Ac-225; this dairy cow is at the JRC Karlsruhe (Germany), part of the Joint Research Centre and the Directorate for Nuclear Safety and Security of the European Commission.

‘It could well be that many colleagues also saw the opportunities for this method, but did not dare to burn their fingers on the technical challenges’

Actinium emits α-particles, consisting of two protons and two neutrons. ‘These α-particles are ideal for this type of therapy’, says De Blois. ‘It causes relatively high damage because of its high energy, but at a very short distance.’ It is therefore very important that it gets precisely into the tumour cells and is quickly gone again if it is not there. About 70% of the unbound Ac-225-PSMA is in the urine within 12 hours, where it does little or no damage. In addition, the PSMA bound to the prostate tumour cells has a biological half-life of about two days, meaning that the body has lost half of the Ac-225-PSMA after two days.

According to De Blois, what took a few years to master were the quality control steps: purification, proving that the product is bound to the chelator, that the production protocol is sufficiently consistent, and that it also arrives in the prostate cancer cells in a sufficiently effective concentration. Every time you administer it. De Blois: ‘It was extremely difficult. We are talking about a few femtomoles of a material that is very difficult to measure, because it can easily be stopped, even by a piece of paper. But francium-221 is a decay product of Ac-225 and this emits γ-radiation (a photon, ed.) with an energy of 218 keV, well within the usual measuring range. That is representative for the amount of Ac-225 present.’

‘Little is known about Ac-225 in a pharmacological setting’

An additional problem is the high energy that is released during the first decay of Ac-225. That process is called recoil and means that the actinium atom is pushed out of the chelator, which changes the chemical properties’, says De Blois. ‘So we first have to do thin-layer chromatography to separate the bound actinium fraction from the fraction released by recoil and from any free fraction of Ac-225, so that we can say something about the amount of actual active drug.’

The damage that the α-particles do to the DOTA chelator and to PSMA means that the product only has a shelf life of three hours, even in the presence of quenchers and radical scavengers such as vitamin C, gentisic acid and ethanol.

‘We have permission to start a phase 1 study, helped by a KWF grant’, says De Blois. ‘An important part of this is a dose escalation study, in which we start low and gradually increase the dose. We have already selected the first patients, who will receive their treatment in mid-February. These patients are a fairly well-defined group: out-of-treatment prostate cancer patients whose prostate has been removed, but with metastases. In Germany, there are a few case studies - not regulated according to phases 1 and 2 - of a similar technique and, according to De Blois, ‘very promising results’ have been achieved with it. ‘Some people were completely clean after three months.’

The GMP treatment technique was published last year in Pharmaceutics, with De Blois’ PhD student Eline Hooijman as first author. There is a lot of attention worldwide for their work, even from the International Atomic Energy Agency, because it is ‘really pioneering’, he says. ‘I’ve been in this world for 22 years now and I know most of my colleagues pretty well, because radiochemistry is not such a big field. It could well be that many colleagues also saw the opportunities for this method, but did not dare to burn their fingers on the technical challenges.’

He saw the fun in it and was helped by his background. De Blois started his career at the MLO and worked his way up through evening HLO to a university master’s degree in drug innovation and ultimately a PhD in radiochemistry. ‘I have a practical mind and that helps a lot with the implementation of these kinds of technical issues. But of course I’m not doing it alone, the team has done a great job. Pioneering is something we do together.’

And the future is bright, De Blois thinks. ‘We are now working on several compounds that we label with Ac-225 and a second KWF subsidy has been granted. So things are really starting to move.’

The new drug Ac-225-PSMA is a cleverly built complex of a protein that goes specifically to the prostate and a DOTA-chelator [(CH2CH2NCH2CO2H)4; a kind of cage construction that can trap metal ions] containing an α-emitter, namely actinium-225 (Ac-225). A spacer molecule connects the protein and the chelator. The protein used is a known ligand of PSMA (prostate-specific membrane antigen), a transmembrane protein found only in the prostate and highly increased in prostate tumour cells. An injection of Ac-225-PSMA is absorbed in a short time - most of it within an hour, continuing for about three to four hours - mainly in prostate tumour cells, where the radioactive Ac-225 decays (its half-life is about ten days) to eventually become the stable isotope bismuth-209. In doing so, it fires bundles of two protons and two neutrons (an α-particle) at the tumour. 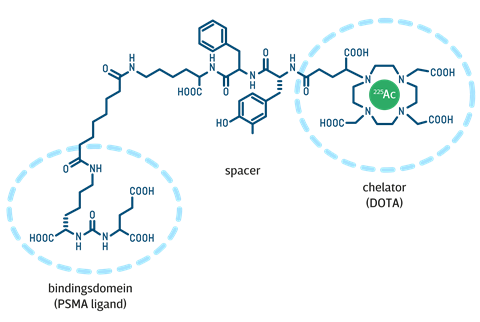