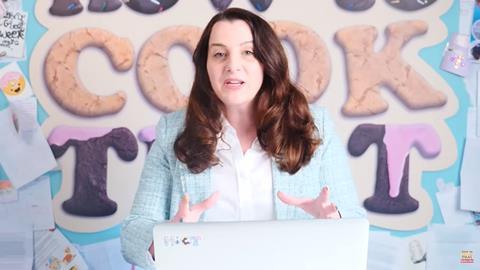 Ann Reardon of the successful YouTube channel How to Cook That (H2CT) not only makes the most beautiful and delicious desserts, but the food scientist and dietician also dives into baking hacks and debunks myths about milk and gluten.

When she was pregnant with her third son, the Australian Ann Reardon developed a rare skin disease that left her unable to go out in the sun and thus she was forced to stay indoors. She started a baking blog – howtocookthat.net – but  learning how to make cake decorations for example is easier by seeing how it’s done, than by reading about it. Reardon initially wanted to put those videos on her blog, but they were too big, so about 10 years ago she created a channel on YouTube to store her videos on. To her surprise, the channel quickly became popular and she now has nearly five million subscribers and almost a billion views.

‘In real life, you get a liquid mess’

Reardon’s background as a food scientist and dietician was not immediately obvious in her first few videos, with the occasional exception where she uses molecular gastronomy. In the first six to seven years, she filled the channel with unusual desserts, including cakes referencing pop culture (Star Wars, Clash of Clans, Minecraft, et cetera), huge versions of well-known brands (Mars, Hershey’s, Ferrero Rocher), or just gorgeous chocolate recipes.

But for about three years now, Reardon has also dedicated herself to debunking (baking) hacks that have gone viral or are featured on prominent ’content farms’ on YouTube, such as the channels So Yummy, Blossom, and 5-minute crafts. In an interview with 7NEWS Podcasts, she says she wants to fight disinformation. ‘There is a difference between misinformation and disinformation. Misinformation is unknowingly sharing misinformation, but disinformation is deliberate lying. A recent example: a hack showed that if you mix ice cream and icing sugar you would get a nice thick frosting, but if you do it in real life you get a liquid mess and waste a lot of good ingredients.’

Everything is tested in her own kitchen

That was her first debunking video, in which the food scientist took a critical look at the So Yummy channel. The great thing about these videos is that Reardon not just critiques the hacks, but also tests almost all of them in her own kitchen while explaining why something does or doesn’t work. That way, her viewers can see the real, sad results. She often adds a better way to do something or provides her own recipe that does yield a good result. Her husband Dave is usually the guinea pig, and his reactions are often hilarious.

Reardon also looks critically at food claims, though less frequently. In this category, she currently has three videos, on (misconceptions about) gluten, milk and vaping. In these videos, she presents a scientific analysis on these different subjects, like whether you should eat gluten-free if you are not allergic to it, and whether you should stop drinking milk. Especially in the video on milk, she doesn’t give direct answers, but gives a lot of data and a realistic look at what milk is, what the alternatives are, whether it is or isn’t healthy and what the environmental aspects are.

In her video on milk, Ann Reardon compares how many beans, broccoli or kale you need to eat to get the same amount of calcium as drinking one glass of milk. Quite a mountain…

She has also written a cookbook, in which her food science background colours the recipes; each chapter starts with an introduction about the food science you need for the recipes. All in all, it is a varied and very scientifically sound, kid-friendly channel that continues the important fight against disinformation - including in the kitchen.

Visit Ann Reardon’s YouTube channel How To Cook That here