A European research team from Amsterdam and Eindhoven is developing an artificial heart that ‘fuses’ with the human body. 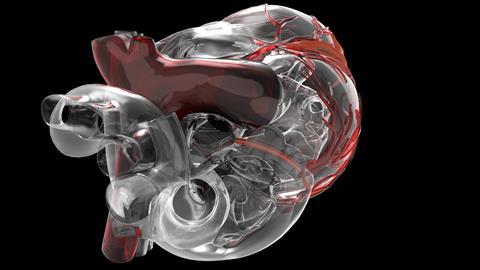 ‘You could see a heart as a large curved vein with valves and muscle tissue around it.’ Carlijn Bouten, professor of regenerative medicine at Eindhoven University of Technology, is not impressed by the somewhat futuristic ambition of the European HybridHeart project: to develop an implantable bionic artificial heart. She makes clear it’s feasible, although there is still a very long way to go. ‘We’ve already succeeded in making veins and heart valves that properly function in the body and have become living materials’.

There is no real artificial heart on the market yet. The closest thing is a ventricular assist device that replaces part of the damaged heart; an external pump in a backpack powers it. HybridHeart, started as an initiative by heart surgeon and professor Jolanda Kluin of the Academic Medical Centre, Amsterdam, wants to take a big step further. It is intended to be a complete heart that requires so little power that a small battery placed on the chest will power it wirelessly. The heart owes its shape to flexible, biocompatible polysiloxane (a chain of alternating silicon and oxygen atoms). Sophisticated airflow through a network of narrow channels inside the material ensures regular contraction. The heart’s lining and valves will be made of biodegradable plastic and will slowly be replaced by the body’s own living material.

‘If the polymers give off the right signals, the body does the work’

Each research group is now working on its own piece of the hybrid artificial heart in the lab. ‘At some point, all the parts will come together’, says Bouten’s colleague Patricia Dankers, professor of biomedical materials and chemistry. Her task is to develop a polymer coating for the inside of the polysiloxane heart. Dankers: ‘The coating has to prevent clotting, recruit the right patient cells and allow them to adhere firmly, while the coating itself slowly degrades. We have demonstrated all these functionalities with supramolecular biomaterials, but they have never been combined in a single multifunctional material. That’s the main focus point at the moment.’ Bouten: ‘we make clever use of fundamental knowledge about the wound-healing process. If the polymers give off the right signals in the right order, the body will do the work.

A prototype of the ‘outside’ has now been made in the laboratory of project partner Bas Overvelde, group leader of soft robotics at Amolf. His job is to ensure that the heart beats. Overvelde: ‘We are looking for an oscillating movement in the air ducts that causes the heart to contract and that keeps it going with very little energy, a combination of fundamental physics and mechanical engineering.’

The exciting heart project has received over €3 million in European research funding and is one of four contenders for £30 million from the British Heart Foundation in the Big Beat Challenge. Bouten: ’We’re thinking of turning it into a student project to really have more clout. Student teams have previously built a complete solar car and electric car, so why not an artificial heart?’

About when the first hybrid heart implant will occur the researchers aren’t sure yet. Dankers: ‘We still have so much to try out. Polysiloxane, for example, may turn out to be not robust enough after all; a heart beats about 35 million times a year. If that’s the case, we would have to look for a better material and adapt the inner layer as well.’