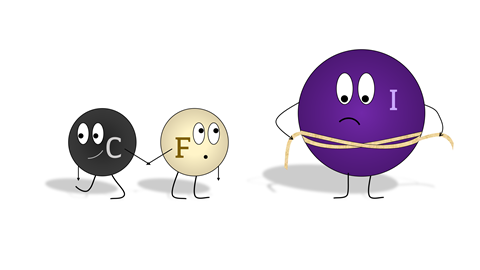 Halogens too fat for paradigm

Bond strength between two atoms previously seemed to depend entirely on electronegativity, but Amsterdam researchers discovered that this is not always the case, according to a paper in Chemistry A European Journal.

Matthias Bickelhaupt’s group at the VU University Amsterdam has struck again (see also this earlier paradigm shift): the paradigm that a greater difference in electronegativity between two atoms results in a stronger chemical bond is not entirely true. Using quantum chemical analyses, Eva Blokker and colleagues have shown how and why the one trend fits the paradigm while the other does not.

The researchers looked at HnX-YHn systems with, among others, dispersion-corrected density functional theory (DFT), choosing X and Y from periodic systems-periods 2 and 3, groups 14 to 17 and bromine and iodine. They show a clear correlation between bond dissociation enthalpy (BDE) and electronegativity (Δχ), but the big question is whether the correlations along periods and groups are causal or not.

The answer to that question is ‘no’, Blokker and colleagues argue in the article. In their bond analyses, they saw that whereas the correlation between BDE and Δχ of some series such as C-C –> C-N –> C-O –> C-F is causal, the correlation in the case of the carbon-halogen bond series (C-F –> C-Cl –> C-Br –> C-I) was merely a by-product of an underlying mechanism. This is pretty ironic, since the latter series is used in many textbooks as an example of the correctness of the correlation.

The trend actually works because of the steric Pauli repulsion between the atoms. The atoms F, Cl, Br, and I are increasingly rich in electrons and therefore larger. This causes an ever-increasing repulsion and thus a larger bond length, which weakens the bond even though the orbital interaction (EIO) between the two atoms becomes stronger. So the textbooks need another update.